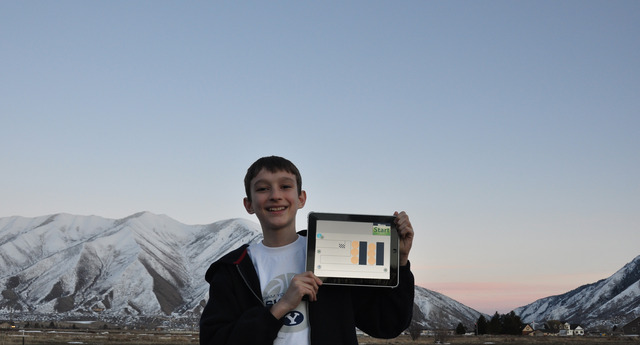 How did a 14-year-old’s PDA game app reach No. 1 on the Apple Free App Chart? The answer: good educational opportunities.

While in elementary school, Robert Nay was touring museums, reading novels and how-to books, and practicing math.  Some people might say "involved learning in the home" helped inspire Robert to create the “Bubble Ball” app, which overthrew “Angry Birds” as the most downloaded app game on the market.

Robert has received a good education in and out of the home. “He attends public schools with wonderful teachers,” said Kari Nay, Robert's mother. When he was little, she bought him educational workbooks, and would take him to the library to check out chapter books so he could read and write in his spare time.

“The scripture 'The glory of God is intelligence' (D&C 93:36) is so important to me,” Kari said. “I think we as Latter-day Saints should encourage education. Even the pioneers set up schools as soon as they could. Education gives you more opportunity to serve and help others. With the resources available now, learning is open to everyone in any field, any subject, right where you are."

Robert believes that his own hard work combined with spiritual blessings have helped him intellectually over the years.

In addition to the challenging and motivating school environment, learning in the home is another tool that fosters application and creativity in her kids.

“I encourage them to do extra, to seek for excellence, not just to get by,” Kari said.
Kari gave her three children multiple learning opportunities when they were young, taking them to the life science and paleontology museums at Brigham Young University, Museum of Ancient Life, the Clarke Planetarium, the Tracy Aviary and the Hogle Zoo.

“We tried to make it fun when they were little. I used their desire to read as an incentive and a reward within itself. They never lost that attitude,” she said.

Robert's invention of “Bubble Ball” wasn’t his first technological development. He created a website for his third and fourth grade classes, has assisted teachers at school with computer trouble, helps family and friends fix computers, has given friends programming lessons and created a website for Kari’s business.

Robert has been studying web development for about five years. He started learning HTML, then CSS, and checked out numerous books from the library about programming and making websites. “It took a couple years [to get it down]. I thought it would be pretty cool, seeing my older brother do it [programming].”

Kari said she often prayed to help find the right resources and people to assist her children's learning. “This is too spectacular to be just us.”

Kari suggested this for parents who want their kids to be excited about learning:

“Nurture whatever is important to your child. Make education itself the reward. You and your child can overcome roadblocks. You can succeed, if you keep working.”

For Robert, the moral of the story is simple: “You can do amazing things if you put your mind to it.”