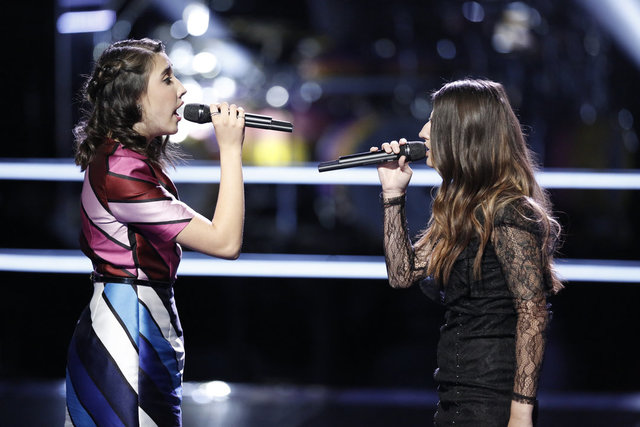 Adam Levine Calls LDS 15-Year-Old's Performance "Spectacular," Sends Her onto Next Round of "The Voice"

"It never gets easy to make these decisions, especially when it's so spectacular," coach Adam Levine said after Hanna Eyre's first battle round on The Voice.

Eyre, still onstage, waited to hear if her first battle—a stunning vocal performance against fellow contestant Sheena Brook—would be enough to earn her another round on the show.

But though this was Hanna's first battle round on the show, it wasn't the first time she had ever "battled" to win a singing competition.

When Hanna was 5 years old, her mother asked her if she wanted to learn how to play the piano, but, in addition to the piano, Hanna was also learning to sing at a young age.

"My very first performance was in kindergarten when I performed 'Castle on a Cloud’ from Les Misérables," she says. "After that, I was hooked."

Hanna says she continued to gain more experience as a vocal artist by performing at Church services and talent shows. Her favorite memory of singing before the show was her performance of U2's "Pride" at a fundraiser gala for her school, the Orange County School of the Arts.

"I love that song and to sing it with my friends from school to raise money for my school was such an honor," she says.

But her first "big" performance before the show was at a battle of the bands summer camp at the Los Rios Rock School in 2014, where she performed her own original song "Believe."

Though she has tremendous talent and past experience performing in front of audiences, she says she still gets a little nervous before a performance, but it's "a good kind of nervous."

"There are butterflies in my stomach and my hands are a little shaky, but I am so excited to get out there and just do my best," she says. "I think it helps me to remember I have to do my best and not get lazy in my preparations before I perform."

And before the nerve-racking experience of performing at a blind audition on The Voice, Hanna turned to her faith for additional peace.

"To stay calm, my dad gave me a blessing the night before, which always gives me comfort. Also, right before I took the stage, I said a prayer and that helped me so much," she says.

And after her incredible performance of "Blank Space" by Taylor Swift, Hanna earned a spot on team Adam and the attention of two other celebrity judges who vied for her to be on their team as well.

But on last night's episode, she faced yet another crucial moment of success on the show. Performing the song "Try" by P!nk, Hanna competed against Brook in a battle that Levine called, "spectacular."

But even though the performance for both artists was incredible, only one could move onto the next round.

Looking at both contestants as they waited onstage, Levine made his decision.

The winner, and the one who would move on to the next round of the show, was Hanna.

Watch NBC's The Voice to follow Hanna's journey through the show.