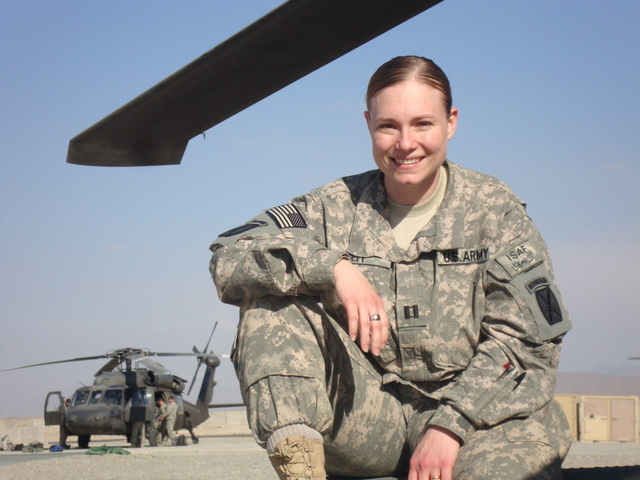 Rachael Neff is a mother, a Mormon, and an officer in the Army. And that combination of things makes her a bit of an enigma.

Before even graduating high school, Neff walked into a recruiting office and told them she wanted to join the Army. "I don't even care what you're going to pay me, I just want to get out of here," she said, looking for adventure.

And it turned out to be a great fit. After graduating, she excelled as a military intelligence analyst, quickly impressing all those she worked with until finally one of her commanders told her she needed to go to West Point to become an officer. So she applied and was accepted.

There was just one small problem: she was engaged. And she wouldn't be able to get married until after graduating from West Point. And that was—including the required one year of prep school—five years away.

"I literally had to choose between getting my education and getting married to this guy," Neff says. "I prayed very earnestly about this decision, and I felt very strongly that he wasn't the right guy." It's hard, she says, "to walk away from a relationship, because we're so encouraged to seek relationships and especially to seek marriage; it is a significant emotional event to listen to the Spirit and understand when He's telling you it's not the right person."

"West Point can take a boy and make him a man," she says. "It doesn't necessarily have the same effect for a female. If you come to West Point as a female, your experiences will be absolutely founding, and they will be developmental, but you don't come out more of a woman. . . . There's a little bit of internal conflict, especially for someone who's raised Mormon. Especially for female Mormons, because we have such a strong foundation of family and nurturing and we have such an incredible desire to see people not suffer."

With very few senior female leaders in the military for her to look up to, Neff felt alone in her struggles, wondering. "Do I have to choose between being a Latter-day Saint and being a woman in the Army? I don't know."

Gradually, though, Neff realized the divide between the two didn't have to exist at all, and she could have both. "It is, I have learned since, one of the biggest lies that the devil tells women these days," she says. "Women buy into this lie so wholeheartedly that we hold it against other women. And the lie is that if your path doesn't look exactly like this—and by 'this' I mean married, children, stay-at-home mom—that you are somehow inadequate. And that lie perpetuates not just in the military but in other aspects of a working female's life. . . . It's absolutely Satan's biggest lie.

"The resounding truth is that The Church of Jesus Christ of Latter-day Saints is the gospel of Christ, and it is for every person on this earth, and it is true. And your path, the way it should look, can only be discovered if you pray about it and you remain worthy to receive personal revelation and you listen to what you're being told by the Spirit. Because I'll tell you, whether you're in the army as a woman or are a stay-at-home mom, whether you sell Mary Kay or are a journalist, whatever it is you do, if that's not the path you're supposed to be on, you're going to be miserable doing it.

"But if it is the path you're supposed to be on, you're going to find great joy and fulfillment and you will find that the Lord will provide you the things you need to have in this life—like the right husband or the right things at the right times at the right places—even if it doesn't look like someone else's path."

And just as Neff believed, things did work out, even if they were different from the way many other people thought they should have been. While at West Point, she met another man, and the day after her graduation, they were married. "He was right," she says. "I knew he was right, and I prayed about it."

After having their first child, though, Neff again felt the conflict returning. "I looked at that little baby boy, and I said, 'How can I be in the Army? They're going to ask me to deploy some day, and how am I going to leave you behind?'" she wondered. "No matter what I loved about being in the Army, no matter how empowered I felt, how successful I could be, no matter what the world could offer me, I knew that there was nothing I could do in life that would be more important than taking care of that kid."

So Neff decided to get out. But before she made such a big change, she and her husband prayed about it—and got an unexpected answer: stay in. "I was a little angry inside about it, because I felt like I was being told to do something that was counter to what [I had been taught]. I assumed that because I was a Latter-day Saint that the moment I was a mom, Heavenly Father would give me the opportunity to be a stay-at-home mom. . . . So to be told, essentially, that I needed to stay in was conflicting for me emotionally. It was a huge cognitive dissonance."

As she lay in bed with her newborn son, her thoughts turned to God. "How could you ask me to do this?" she asked. "I was privately alone in the room with my son, and I was praying and praying to help me understand why. It is one of the more significant spiritual events I've ever had in my life . . . I had a kind of vision where I was standing in a room and I was lifting my son up and I was given the instruction 'Raise your children to Christ's threshold.' And I understood that to mean that there is a threshold—as much as any parent can ever give their child. The most you can do is to give them everything you have in knowledge of the gospel. But no matter how well you do that, there comes a point where Christ takes over and fills that gap, and that's the threshold. And I was given the instruction to raise my children to Christ's threshold. I just understood that if I raised my children with a knowledge of the gospel, that's all the Lord was asking me to do. . . . I just made a covenant between the Lord and myself and my son that I would do everything I could to raise my children in the gospel and let the Lord fill the gap where I fall short. And I just have to have faith. . . . If being in the military meant that I was going to be gone, and that was a gap, that gap was not going to be to the detriment of my children's souls."

Immediately after making the decision to stay in the Army, the economy tanked, and Neff's husband's civil engineering firm laid off 52 employees in one week. Had she left the service, their family would have been completely unemployed.

"I absolutely love being in the army," says Neff. "I'm going to do well, and I will do everything I can within the best of my capabilities while I am here because I realize now I have a mission to fulfill by being a service member, and the things the Lord needs me to do are going to be given to me because of where He puts me."

That mission became even more real in 2010, when Neff was called to a tour in Afghanistan, leaving behind two small children aged 3 1/2 and 1 1/2. "Knowing and believing with unyielding faith that my family was eternal made it okay for me," Neff says. "I'm not going to say that I wasn't scared. I was absolutely scared. But that fear was overcome through faith. Knowing that even though I have small children and I didn't want to leave them, I didn't want to leave my husband, I didn't want to risk not coming home, I knew it was going to be okay no matter what happened. That in the end, whatever the Lord had planned for us was going to be for our good."

Once arriving at Bagram Airbase, Neff was called as the Relief Society president for the branch there—and she found other women struggling with the same issues she did. "I found that there was a great need in the LDS community for that understanding that it is okay. That if you're here, and you have faith, and you've done the right things, and you've listened for personal revelation, Heavenly Father will give you the path you need to be on. That doesn't mean the Church isn't true. It doesn't even mean the Church disagrees with you, because the Church doesn't disagree with you," she says.

"I found that most military sisters struggled to find their roles in the Church or to understand that it is good and desirable to be a strong Latter-day Saint woman, and that that representation is needed in an environment such as the military. The world is very harsh, and in the military it can be even more harsh, and the things you're exposed to are not always the most pleasant. The need for nurturing, kind, goodhearted LDS women with values is so important. It is vital to stand up for what you believe in and for others to see you."

Looking back at her journey, Neff concludes, "I believe that there are, even in our darkest times, ways that our Heavenly Father directs us on the path that is best for us, even if at the time we don't see that that was the path we thought it was going to be. . . . I know that I have been blessed because of my military service and that my family has been blessed for it."

Read the phenomenal stories of miracles and more that Rachael Neff and several other veterans, including a Vietnam prisoner of war, experienced during their military service.