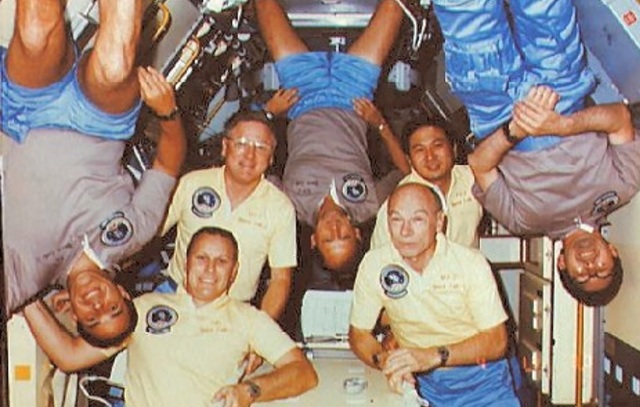 LDS Astronaut Shares What It's Like Taking the Sacrament in Space

For the first Mormon who ventured into outer space, the experience left a remarkable spiritual impact.

As a small boy, Don Lind and his sisters loved to climb trees in his neighborhood in Midvale, Utah, shaking the branches and pretending they were in a spacecraft hurtling through the universe. At that time, space travel was a feat only dreamed up in comic books and science fiction. It wasn’t until over 20 years later that the first men entered space in 1961. After hearing the news, Lind—then a Navy pilot and Doctor of physics—knew he had found his calling.

But it would take survival courses in the Panamanian jungle, night shifts in emergency rooms, and graduate level coursework in geology to get Lind prepared for a mission of his own—a mission for which he had to wait 19 years.

Lind’s own spaceflight finally came in 1985 when he boarded the Challenger for an eight-day journey to study the Aurora Australis.

About this awe-inspiring experience, Lind shared in the 1985 October general conference:

Most of you, I am sure, have seen a space shuttle lift-off on television. I can assure you that it’s as exciting as it looks. . . .

With seven and one-half million pounds of thrust pressing you back into your seat with three times your normal weight, you quickly pick up speed. By the time the fuel runs out, you want to be going fast enough so that centrifugal force will keep you in orbit—and that takes 17,500 miles per hour. . . .

I am sure the general image of space flight is one of impressive machines and billowing flames and the precision of high technology. That is not incorrect. But for me, there were also many special, personal, private feelings. Some of them were fun. Living in weightlessness is delightful. The Peter Pan ability to float to any corner of the laboratory and perch like a sparrow on the slightest protrusion made me feel as though I was living my little boy dreams.

Seeing the World from Above

Some of my personal feelings were very spiritual. To look down on the earth from space is absolutely incredible. I knew ahead of time just exactly what I was going to see. I was intellectually prepared, but I was not prepared emotionally for what I saw. The world is very large. I knew that. But to see this huge, magnificent sphere slowly rotating beneath me was overwhelming. I have no ability to describe what it was really like, and no photographic emulsion can even start to do it justice. The visibility, of course, was excellent. But I was amazed at the intensity of the colors. I estimated that there were twenty shades of intense blue as the earth’s atmosphere changes from the gray of the curved horizon into the incredible black void of space. And when you look at an archipelago of islands, there are hundreds of shades of blue and green and yellow tan that are just beyond description.

The first time I had a minute to stop and just look at the earth, the absolute beauty of the scene brought tears to my eyes. In weightlessness tears do not just quietly roll down your cheeks. They stay in front of your eyeballs and get bigger and bigger and in a few moments you feel like a guppy looking up through the surface of the aquarium.

Now, try to imagine what it was like for me to have that scene in front of me and then have the fragments of half a dozen scriptures pop into my mind. “The heavens declare the glory of God.” (Ps. 19:1.) If you have seen the heavens, you have “seen God moving in his majesty and power.” (D&C 88:47.) I am sure you can imagine the closeness I felt to my Father in Heaven as I looked down at one of His beautiful creations. I was really stirred by an increased awareness of what He did for us as the Creator of our earth. That was one of the most moving experiences of my life.

Partaking of the Sacrament in Space

Another experience that is very close to me was to have the sacrament in orbit. We were in space for a full week, so of course, we were up there on a Sunday. Our bishop had given me permission to hold my own sacrament service. It was a little unusual. You priests in the audience might consider what it would be like to try to kneel down in weightlessness—you keep drifting off. For privacy I held my sacrament service in my sleep station—something like a Pullman berth. I kneeled on what you would think of as the ceiling and braced my shoulders against my sleeping bag so I would not float away. It was a very special experience. I will remember that sacrament service and the renewing of my baptismal covenants high above the earth all my life. It had some of that special feeling that you usually have only when you go to the temple.

The Biggest Miracle of All

Many miracles surrounded Lind’s exploration into space, the largest being simply his safe return home.

About the reentry, Lind said:

This is all very clever, except for the fact that the shock wave is fifty-four hundred degrees Fahrenheit, which is well above the melting point of astronauts. That is why we worry so much about the thermal tiles on the underside of the shuttle. During reentry they glow red hot. In fact, the very air around the shuttle glows red hot. From the ground we look exactly like a meteor crossing the sky. Looking out the windows through that fireball is a fairly impressive experience.

Just nine months after his mission, the Challenger—the very shuttle Lind traveled on—exploded 73 seconds after liftoff due to faulty O-rings, killing the seven crew members on board. Lind believes that a priesthood blessing he received before his flight protected him and his crew from a similar fate as they hurtled through the earth’s incinerating atmosphere. Full of faith and gratitude for the Lord’s protection, Lind said, “We weren’t more righteous or more deserving of the Lord’s help—those on the Challenger were good people—but it had been promised us.”

Lead image from Wikimedia Commons. Don Lind is the astronaut on the left wearing glasses.