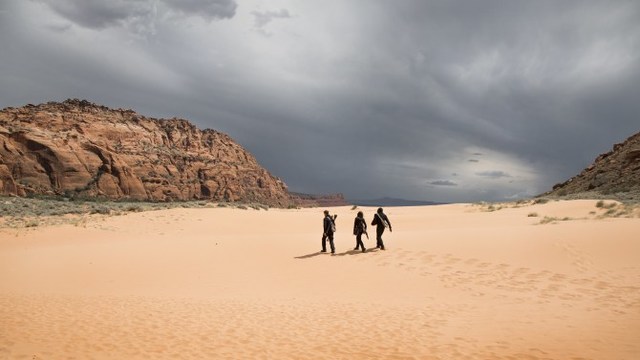 Created by Ender’s Game author and science-fiction legend Orson Scott Card and New York Times bestselling author Aaron Johnston, this 10-episode, action-packed sci-fi series takes place 400 years after the extinction of the human race and follows a small group of humans who are revived by an alien civilization.

The aliens claim they want to restore the human species, but the reborn humans uncover new dangers, hidden agendas and powerful secrets that challenge that claim and threaten to annihilate the human race all over again.

“Following the incredible response to our first scripted drama, Granite Flats, we are bringing a powerful apocalyptic story to life, written by two of the strongest writers in the world of speculative fiction, and directed and produced by top independent filmmakers,” said Derek Marquis, managing director of BYUtv.

Extinct carries the colony of revived humans through struggles with the aliens who extinguished humankind centuries before—while trying to understand and get along with the mysterious aliens who revived them. Nothing is as it seems to be, and if they aren't careful, courageous, and unified, they'll find themselves under the control of one group or the other.

Orson Scott Card won the Hugo and the Nebula Awards for Best Novel for both Ender's Game and Speaker for the Dead, not to mention Ender’s Game was No. 1 on the New York Times' Best Sellers List of Paperback Mass-Market Fiction for eight weeks in 2013. Aaron Johnston is a New York Times bestselling author, comics writer, and film producer.

Actor Chad Michael Collins plays the lead character, Ezra, and is best known for his work in the feature film Sniper series (Sniper: Reloaded, Legacy and Ghost Shooter). He has also appeared in films and TV shows including Room 33, Lake Placid 2, CSI: Miami, New Orleans and New York, NCSI, Once Upon a Time, 2 Broke Girls, Major Crimes, 90210 and Last Resort. Collins is slated to star in the upcoming feature film, Howlers, alongside Sean Patrick Flanery and new TV show, Freakish.

Director Ryan Little, is a Canadian-born cinematographer who along with producing partner Adam Abel has won 16 “Best Picture” awards on the film festival circuit, including two nominations for the Independent Spirit awards. Some of his films include Saints and Soldiers, Saints and Soldiers: Airborne Creed, and Saints and Soldiers: The Void and Forever Strong. In 2013, Little also directed two episodes of BYUtv’s first original scripted drama series, Granite Flats.

Producer Adam Abel started his career at Paramount Pictures before founding Go Films in 2002 with Ryan Little. In 2016, he produced the documentary film, The Journey Home, which chronicled the experiences of Vietnam Veterans as they returned home from the war and featured interviews with actor Jon Voight, and Medal of Honor Recipient Sammy Davis, amongst others. Abel worked with BYUtv in 2015 as a producer on Joan of Arc.