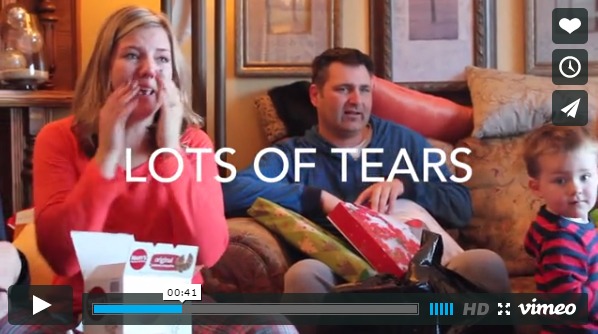 LDS Baby Announcement after Infertility Has Family in Tears

In an interview with the Deseret News, Whitney Quinton said the support from friends and family in response to the video was "unbelievable and extremely overwhelming."

“We wanted to film their reactions because we knew they’d be surprised because everyone, including us, thought we could never have children,” Quinton said. “Making it into a movie allowed our other relatives and friends to feel like they were there. We wanted to mesh all the reactions together so that we could someday show it to our children.”

Taylor Swift’s “Love Story” plays over the top of the video. It's the song some family members sang at Whitney and Brett’s wedding reception December 2008 and has added meaning because “it’s totally a love story now that we’re going to have a family,” she said.

Christmas has been an emotional time for Whitney Quinton throughout her life. It was during the holiday season when she and her husband were informed of some of the reasons they were struggling with infertility. And in December 2004, Quinton had her first surgery to treat a brain tumor.