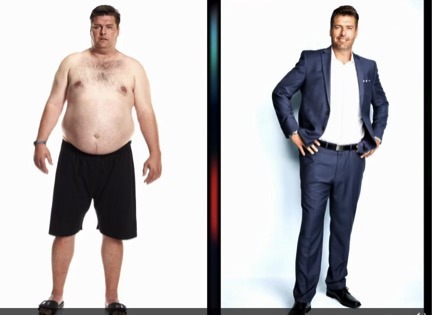 Mitchell, who weighed 366 pounds at the beginning of The Biggest Loser weight loss competition, had packed on the pounds since his pro football days with the Miami Dolphins, Baltimore Ravens, Detroit Lions, and Cincinnati Bengals. Knowing he needed to make a change, Mitchell felt prompted to fill out an application for the show. But when it was time for auditions, he decided not to show up.

“I just couldn't go in,” he recalls. “I'd been in the public eye as a professional football player for 12 years, and I didn't want the criticism that I would get for letting myself get so big and out of shape. So I left.”

Despite being a no-show at the auditions, a casting director contacted Mitchell and asked if he was interested in competing.

“I can’t thank him enough for making that call,” he says.

“My dad died last January after a long battle with weight-related diabetes. I realized that would be my own future if I didn't change,” he says. “The Biggest Loser was a second chance at getting my life back. I just decided I didn't care anymore what people thought—my life is more important than any criticism I might get from people.”

After fiercely competing for 16 weeks and losing a jaw-dropping 126 pounds, Mitchell was eliminated from the competition on this week’s episode. His time on The Biggest Loser was about much more than just weight loss, however. According to Mitchell, the competition was just as much a spiritual journey as a physical one.

“The first day I was on the show, they said I would lose all the weight, but if I didn't get to the bottom of why I gained weight, it would all come back,” he recalls. “So, I spent a lot of time soul searching, praying, and crying. I deepened my relationship with God and my testimony of Christ. I found who I am and what I'm fighting for.”

He adds, “I had to humble myself and ask for help and be willing to do the work and have faith that I could be helped.”

Mitchell says that during the competition, he began to find deeper symbolism and spiritual meaning in his experiences.

“Most days I would watch the sunrise, which is an amazing sight in itself, but as I started each day hiking, there would be fog covering the mountains, and as the sun rose, it eventually would melt the fog and expose the beautiful mountains. It hit me that my body was like the mountains, and my beauty was hiding behind my own fog, which was fat. With the assistance of an external source, the sun, or God, I have been able to remove that fog and expose the beauty that lay hidden.”

So, what are his goals now that his time on the competition is over?

“In five years I want to still be at the same weight and health that I'm at now,” he says. “It's not about getting to a goal weight and that's it—it’s about being present physically, emotionally, and spiritually everyday.”

Read about Scott Mitchell and other faithful LDS reality TV stars in the current issue of LDS Living!