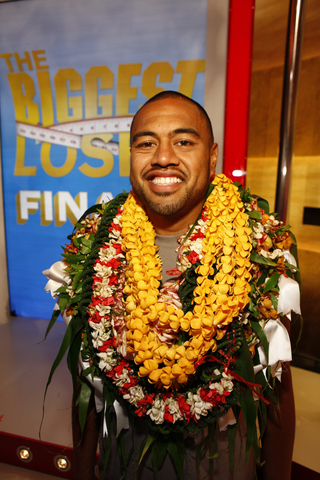 At 28 years old and 403 pounds, Koli Palu knew he needed to change his life—and he has made that change while competing on season nine of NBC’s hit show, The Biggest Loser.

“In Tongan culture, everything we do is cause for family gathering—baptisms, baby blessings, somebody’s first talk—there’s an occasion for everything, and there’s always a lot of food,” said Palu. “That’s how I gained a love of food. For me, food equals good times with family and friends.”

Teamed with his cousin, Sam Poueu, the two have proven to be tough competition on the show, surviving weekly eliminations to be two of the final eight contestants. Palu, a returned missionary who served in the North Carolina Raleigh Spanish Speaking mission, says he and his cousin draw tremendous strength from each other, and that he also found inspiration from a team of two Tongan cousins, Filipe and Sione Fa, who competed in the seventh season of the show.

“I’d only seen a couple episodes, one of which was the makeover episode. I saw Filipe, and I remember him walking out, and his wife was there,” Palu recalled. “I saw the love that they had for each other, and I knew if I wanted to make that next step in my life, I needed to make some changes. I put everybody else in front of me. I would use that gratification of service but wondered, what was I doing for myself?”

Palu says that when he first agreed to be on the show, he viewed it as “just a competition, a chance at winning money.” But he soon discovered there was much more at stake. “[Sam and I] realized that the show was more than a competition—it was really about changing our lives and figuring out what got me to 403 pounds.”

Before the show started, Palu began to look introspectively and determined that in addition to his Tongan heritage, his lack of self-esteem contributed to his obesity.

“I didn’t think I was worth changing myself,” he recalled. “I would just give up. I figured I was going to be fat and lonely for the rest of my life. That became my goal: to find myself and that self-esteem that I needed so badly. I found that in the show, but it’s only part of the journey.”

As of the April 27 episode, Palu has lost 144 pounds in 15 weeks. He says his goal now is “to stay healthy for the rest of my life. I also want to be a college football coach. I want to be a father and husband, to find someone I can take to the temple. There were a lot of lessons learned from the show to help me become a better man.”

“I don’t know if I could have lost the weight without the show,” Palu continued. “I’m grateful for the path it took me on. I’ve come a long way from that guy I used to be—not just because of the weight loss, but because of the things I’ve been able to accomplish on my own.”