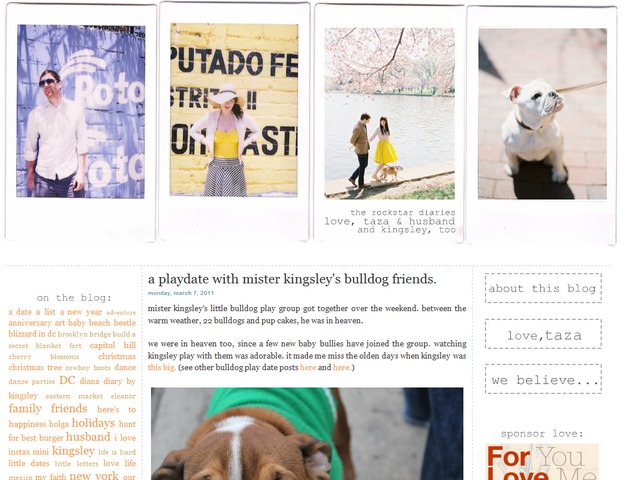 With the rapid spread of the blogging world, these seven women are part of what has become known as The Bloggernacle, a special niche in the blogging market belonging to Latter-day Saints. Although their blogs do not have a religious focus, they still maintain the unmistakable character of an LDS lifestyle, including projects with the kids, attending church, modesty, joyful inspiration, and high standards.

But what separates these Bloggers from the rest of the bunch? What is it that attracts so many readers to their pages? It’s a dynamic mix of real life moments, creativity, and happiness that intrigues so many people to continue reading and come back time and time again.

While Gabrielle Blair blogs about design meeting motherhood on her blog DesignMom, Naomi Davis narrates the life of newlyweds with The Rock Star Diaries, and Nicole Hill Gerulat shares updates about her creative photo shoots and favorite “sissies” with A Little Sussy. Elaine Hearn is writing about modest fashion at I’m Clothed Much, while Liz Stanley blogs her creativity at Say Yes to Hoboken, Courtney Kendrick blogs personal essays at C. Jane Enjoy It, and Stephanie Nielsen shares everyday inspiration at NieNie Dialogues.

Each of these women has garnered a surprising amount of readers in a relatively short time, making them each a blog of note in the online world. Yet, despite their success, these women are very modest, humble, and friendly.

When asked if she felt any pressure to portray herself as the perfect woman due to expectations from being LDS, Gerulat says she didn’t feel any. “I know there is that expectation, but I’d hope people would remember that I’m only blogging the positive. I know some people can feel frustrated when they read a perfect happy blog with a perfect life in the editor, but we’re usually blogging the positive. . . .No one can have it all, I know blogs can seem like that. A lot of people have said I have the perfect life and it makes them depressed, and that makes me sad they think that. They just have to remember, successful bloggers blog the positive.”

In the midst of blogging about those positive moments in life, they still find a dynamic approach to portraying the gospel in their blogs. Whether it’s an inclusion of the Church’s icon and link to the LDS.org webpage, or the posts about church activities or callings that hint at being LDS, readers are noticing their faith.

Davis feels humbled and motivated from readers’ responses to her faith. “I don’t go and blog thinking of being an active missionary, but I’m open and sincere about my daily life, and the gospel is such an important part of my life and who I am so it’s obviously going to show up on my blog."

Although many of their subscribers are member of the Church, this is by no means exclusive. Each of these women has a prolific number of blog followers, many of them non-members. It seems that Mormon bloggers have caught the attention of people in general, as witnessed by the recent Salon article, which chronicles the addictiveness of the “shiny, happy, lives” presented by many LDS blogger moms. For several of these women, this demographic has even brought several “missionary moments.”

Elder M. Russell Ballard was on the right track in his 2007 address to BYU-Hawaii when he encouraged the use of new media in spreading the gospel and the message of the Restoration.

“We’re living in a world saturated with all kinds of voices,” Elder Ballard said. “Because now more than ever we have a major responsibility as Latter-day Saints to define ourselves instead of letting others define us. Far too many people have a poor understanding of the Church because most of the information they hear about us is from the news media reports that are often driven by controversies. Too much attention to controversy has a negative impact on people’s perceptions of what The Church of Jesus Christ of Latter-day Saints really is.”

Whether we like it or not, people will continue to write about and research Mormons on the web, and it is our responsibility to ensure that those interested receive correct information. Bloggers who lead their lives and present themselves in a way consistent with the teachings of the gospel are definitely a plus to the LDS community’s online presence.

“I do a lot of travel—that’s where I get a chance to talk to people and have these conversations. It’s very curious, the further you get from Utah, the further you rely on popular press for descriptions of Mormonism. That means ‘Big Love,’ whatever current scandals are going on—the Church and Proposition 8 in California—whatever they’re hearing,” Blair says, who is very open about being LDS on her blog. Although she doesn’t typically discuss religion, she’ll write about General Conference and other church-related events in her life.

But even when she’s not blogging about religion, readers are still able to perceive the characteristics typical in LDS families, such as mentioning her six kids. “Anyone that’s grown up in the Church would probably say something to the effect that it influences every part of your life—my work ethic, my big family, who I married . . . .On the blog I am very sensitive to the fact that I’m representing motherhood. Not even necessarily Mormon motherhood, but mothers in general. The Church is so pro-family and pro-motherhood, I want to be a good example and show motherhood in a positive way.”

Blair has conversations all the time with non-Mormons about Mormonism because of its presence on her blog. According to her, people are very aware of the huge number of Mormon blogs out there.

Davis, who gets emails from people at all levels of familiarity with the Church, says many are interested in knowing more about her faith and how she finds happiness in life. She is not a religious blogger, but because God, family, and her marriage are so special to her, it becomes a big part of her blog. “I think one of the most powerful missionary tools is to live the gospel every day and to be an example via inside and outside the blogging communities.”

One of Hearn’s missionary experiences includes sending a Book of Mormon to a non-member from a foreign country after she asked about Mormonism. Her modest fashion blog has enabled her to realize that not everyone who dresses modestly is Mormon. Her blog attracts people of any faith or background who are interested in style, and creating outfits from limited amounts of clothing. “Even though I don’t openly bear my testimony every day, I know I’m doing something. People don’t usually like faith mentioned in fashion, but a lot of comments I’ve gotten say they like how I approach it. They say they have a greater respect for religion because of it.”

Sensitive of her representation of being LDS on her photo blog, Gerulat doesn’t want people to see anything contradictory to her faith.  “I think a lot of people are interested to know what makes you who you are, and faith plays a huge role in that.” Occasionally alluding to the gospel in posts like the anniversary of her baptism or her daughter’s blessing day, Gerulat will include links to Mormon.org so people who are interested won’t get the wrong information. Although her blog is not a religious blog, Gerulat answers questions on Formspring, where anonymous individuals have asked increasingly about Mormon’s beliefs and lifestyles. “I thought, if [readers] have questions and they search online for answers, they will most likely find negative websites. It’s better that I answer them.” Gerulat is happy to talk about her faith if people ask, but is careful in her responses. She usually seeks advice from other LDS people to make sure she’s answering correctly. Gerulat knows many people who want to keep their blogs completely professional and without any reference to faith, but she says it “doesn’t have to be intense. You can allude to it, and who knows, if one person joins the Church, a lot of good can come from that.”

Just a few of the successful blogs of note within the Bloggernacle, these individuals have been making an impact on their readers’ one post at a time. Whether it’s a new craft, great photography, or the inspiration to become more positive, these women share their happiness and great ideas with others.

“I will say I think blogging is ultimately a really wonderful blessing for the women in the Mormon community, but also mothers in general,” Blair says. “I mean I was a mother for many years before I was a blogger. It is a thankless job and mothers know that, but want to do it anyways. Blogging really changes that. It absolutely validates every little thing you do as a mother from making breakfast in the morning, to getting the toddler dressed, or going to the dentist, or finding new shoes for your husband. Whatever little things you do as a mother—a thousand every day—you can write about that, share those successes or failures, whatever, and have a thousand or even just four or five people congratulate you and say we totally get it. There was nothing like that before blogging, and it could be a sort of sad and lonely place, sometimes. But for me and for thousands, maybe millions of women blogging has changed that. It gives you community access twenty-four hours a day where you can find someone who’s going through the same thing and talk to them.”

By blogging about their lives and their interests, these Latter-day Saints are making an impact on audiences of all genres, whether it is a mass of Mormons in Utah, or the non-member corporate businesswoman; the best part is they blog because they love it.

The “Bloggernacle” includes a huge number of fun, upbeat, LDS blogs. A few other fast-rising blogs-of-note include:
Steoffrey Language, detailing Stacie, Geoff, and Baby Ivy’s adventurous exploits.
Mormon Mommy Blogs, a whole blog about Mormon Mommy Blogs.
Simple as That, a blog of artistic crafts and photos.
House of Smiths, a creative blog of making a house a home.