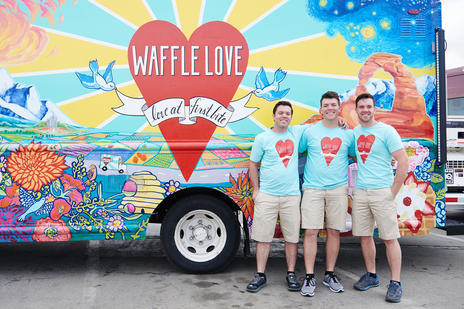 MR says: What a delightful and delicious opportunity for these three brothers from Utah. For more about Mormons sharing their cooking skills on national television, check out "18 Mormons on Reality TV Who Stood for Their Standards" or "LDS Mother & Daughter to Be Featured on PBS for Their Incredible Pies."

Entering its sixth season, “The Great Food Truck Race,” a reality competition show, has selected seven food trucks from around the country to travel Route 66 selling their fares and competing in challenges. The season will start in Santa Monica, California, and end in Chicago. The last team standing wins $50,000.

Terry said it was a “dream come true” to compete on the show, and he's had "The Great Food Truck Race" in his sights since Waffle Love was born. He started selling his unique Liege waffles out of a truck in 2012. Terry's was the first food truck in Provo.

When Terry began operating his first truck, customers would often tell him he should be on “The Great Food Truck Race.” However, Terry was busy keeping his business alive and hadn’t seen the series. When he got a chance to watch, he agreed with his customers.