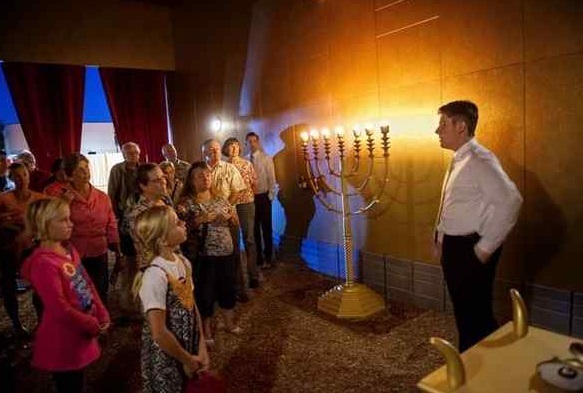 A life-sized Old Testament tabernacle replica has been brought to Chino Hills, California, and is open for public tours this week.

“We wanted to bring it to Chino Hills so that people of all faiths could experience it,” said LDS member Adam Eliason, according to the Chino Hills Champion. “Particularly those who regard the Old Testament as a source of spiritual guidance in their lives.”

What started as a project by the Meridian Idaho North Stake to build a tabernacle replica to teach their youth about its significance ended up inspiring others to share the gospel with thousands in California.

When Huntington Beach Stake President Rick Johnson saw that the Meridian Idaho North Stake built a tabernacle in 2015, he wanted to create the same experience for his own stake. After talking with a stake president from the Murietta Stake who would collaborate to help secure land in Murietta, California, for the life-sized tabernacle, the Huntington Beach Stake constructed the tabernacle, and President Johnson saw the project come to fruition in the summer of 2016 in time for their youth conference.

After the youth conference, and with permission from the Huntington Beach Stake, the Murrieta Stake opened up the tabernacle to guided, public tours.

Unsure of how many people would attend, director of public affairs for the Murrieta Stake Mark Wright said organizers would have been happy with 60 people per night and two tour guides. But as the word spread through social media to the surrounding stakes in the valley, 60 turned into around 800-1,000 people per night with 10–12 tours and three tour guides.

"It was just amazing to see what Heavenly Father did with the event and how it was so different from what we anticipated it was going to be," Wright said. "I think it brought the LDS community together in this area and it really did a lot in regards to interfaith outreach."

Wright said city officials, including the mayor of Murrieta, attended the event. He also estimates that about 400–800 people from different faiths toured the tabernacle, some of which admitted they didn't know Church members believed what was taught in the Old Testament.

Later the tabernacle was reassembled at the Huntington Beach Stake and had another successful week of tours in November of last year, attracting more than 900 visitors in the first night.

This week, the tabernacle is open to the public in Chino Hills, California, for 30-minute tours available every 10 minutes. According to the Inland Valley Daily Bulletin, the Upland and Chino Stakes expect 6,000 to 8,000 people to visit to tour the tabernacle.

“Moses’ Tabernacle was a sacred place for the children of Israel as they traveled in the wilderness, helping them draw closer to God. We hope that visitors will have a similar experience as the tour the replica of the tabernacle, reminding them of the importance of sacred spaces and allowing them to feel God’s love for us,” said Upland Stake President Miles Peterson, according to the Inland Valley Daily Bulletin.