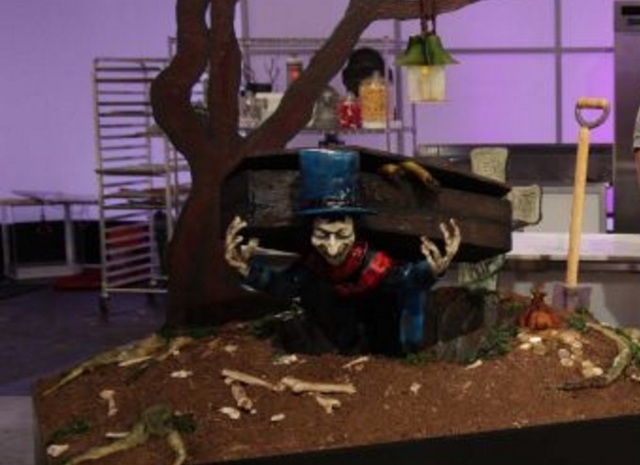 The Food Network's ghoulishly gourmet show "Halloween Wars" is already well underway and heading into its final week. "Halloween Wars" is a cooking competition with a gruesome twist, where a pumpkin carving expert, cake artist, and sugar artist team up to create creepy confections.

And helping to build these scary creations with some sugar and spice and a few things not nice is LDS candy maker Charity George. George appeared on the show in 2012 on team Screamish, and now she is back again and heading into the show's finale.

Teamed up with pumpkin carver Joseph Yakovetic and baker Kristen Lovullo, this trio makeup team Spell Binders, one of only two teams that have impressed the judges enough to make it to the final episode.

18 Mormons on Reality TV Who Stood for Their Standards

The first episode of "Halloween Wars" premiered Sunday, October 4, with a weekly episode appearing every Sunday until Halloween. For the first episode, five teams are given the challenge of taking three delicious ingredients—pumpkins, cake batter, and sugar—to create two kitchen nightmares, a Small Scare and a Spine Chiller. Each week a team is eliminated until only two remain to battle it out.

Check out the final episode this Sunday!