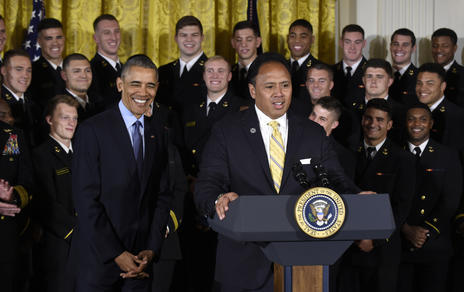 You could say that Navy football coach Ken Niumatalolo and the Midshipmen have become well acquainted with U.S. President Barack Obama during his two terms in office.

Navy has received the Commander-in-Chief trophy by defeating fellow military schools Army and Air Force in 10 of the last 13 seasons, which includes a ceremony and trophy presentation in the White House. Navy was there when President Obama started his first term, and the team was there again Wednesday in the final year of the president's second term.

"Mr. President, it's always an honor for us to come to the White House," Niumatalolo said, according to an article in the capitalgazette.com. "We take great pride in the fact that we've been here pretty much for your entire presidency."

[Check out Ken in Meet the Mormons!]