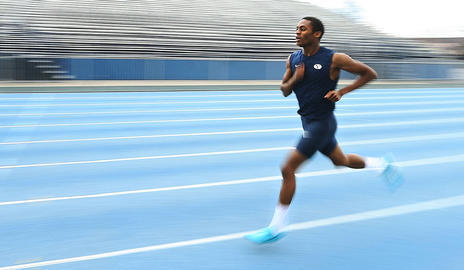 Ed Eyestone, the BYU track coach, was hoping to keep his latest star-in-waiting, Shaquille Walker, a secret a little longer, but the word is out, and it’s entirely Walker’s fault. Three races, three wins, three national-class times, three defeated Olympians, a couple of records — that will put your name out there.

Eyestone is calling Shaquille Walker (yes, after the basketball player) a “freakish” talent. How he landed at BYU is as unlikely as his fast start to the 2015 season, and the short version of it is this: A black, Southern Baptist from Georgia meets girl, follows her to seminary class, joins the Mormon Church, signs with BYU over the objections of teachers and friends, serves a mission and here he is.

Just six months removed from a mission to England, he was expected to use this season to gradually regain his fitness and ease back into competition. Instead, he has delivered a trio of eye-opening performances.

In his first official competition in more than two years, Walker won the rarely contested 500-meter run in Provo with a time of 1:01.05, fastest in the nation this season and not far off the collegiate record of 1:00.63.