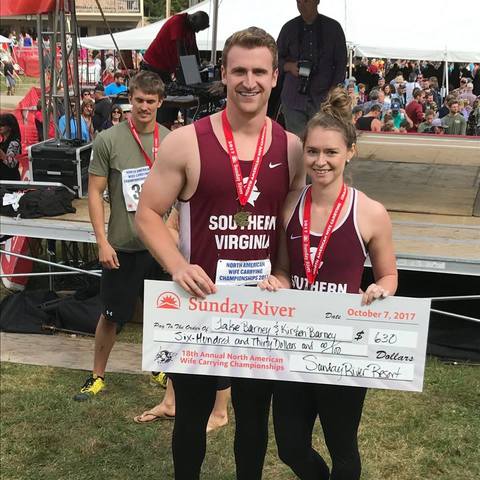 A wife carrying race is no walk in the park, but that's exactly what Jake and Kirsten Barney of Lexington, Virginia, made it look like. Jake and Kirsten competed together in the North American Wife Carrying Championship last October in Maine. The couple took first place running the 278-yard (254-meter) race in a time of 58.26 seconds.

This journey, which started as a joke, soon became a passion and a relationship-building experience.

"Before a competition, we pray intently. I believe prayers should be focused intently all the time, but before a competition, you pray that your training and preparation can be used to do well in this unusual race, and especially that I won’t fall on my head," Kirsten shares.

But the course doesn't just require one partner to carry the other; it also requires the carrier to wade through thigh-high water and vault over logs, among other challenges.

"Some might think that the carried doesn't have to do much, but they are upside down for the whole race," Jake says.

"The hardest part of being carried is that I cannot see what is going on around me. I just have to hang on tight and cross my fingers that Jake doesn’t fall," Kirsten adds.

But the competition has definitely brought together the couple in a positive, uplifting way.

"It has given us the opportunity to put more trust in each other. We get to interact with fun people together and overall have another common goal that we get to work on together," Jake says.

For winning, the couple earned Kirsten’s weight in beer (12 cases) and five times her weight in cash ($630). The couple decided to keep the money but gave the beer to the second place couple.

"We have a strong testimony of the Word of Wisdom and gave away our winnings to other competitors. While there were people that were surprised and thought us a little crazy, no one seemed to judge us negatively and it was a good way for us to share our beliefs," Jake says.

The second place couple was Giana and Elliot Storey of Westbrook, who finished the course just half a second after the Barneys, according to Press Herald. 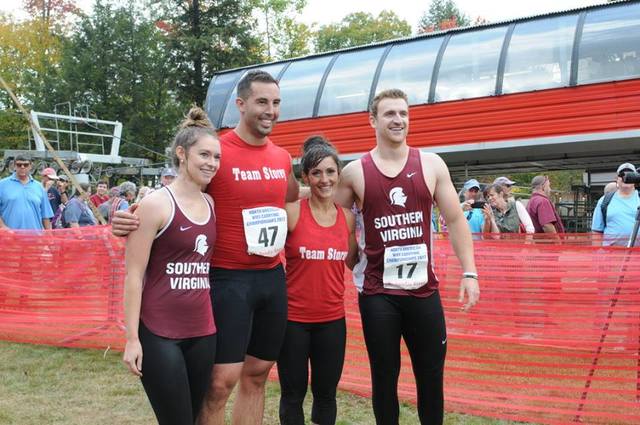 The race is based on the Finnish Legend “Ronkainen the Robber,” who was the leader of a gang. Although traditionally the wife is carried, now the couples are not required to be married and either partner can be carried.

The couple plans to continue onto the World Championships in Sonkajarvi, Finland, in July 2018, and Jake says they plan to compete in future North American Championships.

"Our faith has been impacted by being in this kind of a competition. It has helped us know that with each other and God, we can accomplish very difficult challenges and barriers," Kirsten says.