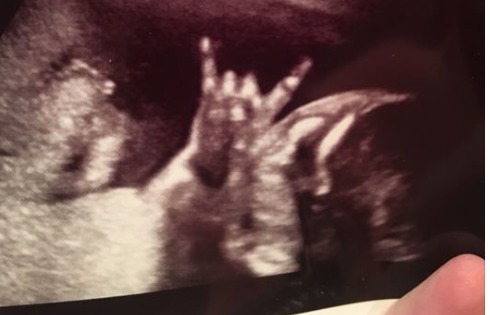 An LDS couple's sonogram picture of their unborn child is gaining a lot of national attention—but not for the gender reveal reason you might suspect.

Jared Ahlin was with doctors at his wife's ultrasound appointment when they noticed something unusual about the way their baby was holding up its hand.

“She [the doctor] kind of went passed it, and I was just like, ‘Hey, go back, I need that picture!’” Jared told Little Things.

That's because his baby's hand was making a perfect "rock on" sign, with just its pinky and index finger raised.

The couple took pictures of the sonogram at the doctor's office to prove it's authenticity and the picture, which has since been shared on social media, has gained attention from news agencies like AOL, Fox 13 and kanascity.com.

"Well it's official our kids are the coolest even before they enter the world . . . or they are just really full of themselves, but I already knew that was going to happen just look at their dad," the baby's mother, Makelle Ahlin, posted on Facebook.

This is the couple's third child, and so far Makelle is 22 weeks along. The couple also told Fox 13 they wanted to keep the gender of their baby a secret until its due date.