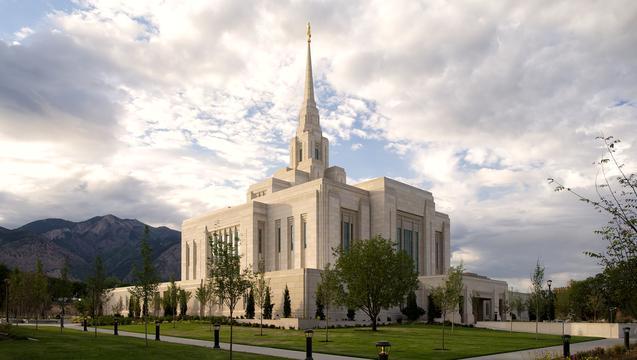 The public open house for the Ogden Utah Temple will begin on Friday, August 1, 2014, and run through Saturday, September 6, 2014, except for Sundays.

The temple will be formally rededicated in three sessions on Sunday, September 21, 2014 at 9:00am, noon, and 3:00pm. Each of the sessions will be broadcast to Latter-day Saint meetinghouses int he three Utah areas and to congregations in Riverton, Wyoming.

In conjunction with the temple rededication, there will also be a cultural celebration featuring music and dance on Saturday, September 20, 2014.

Click here to make reservations for your own tour of the temple!

A broadcast for Seminaries and Institutes of Religion teachers and administrators will be transmitted over the Church broadcast system on Tuesday, August 5, 2014 with subsequent rebroadcasts to many areas of the world.

Click here to find times for live broadcasts and rebroadcasts.

Performed on even-numbered years, this local pageant portrays the settling of the frontier. Along with the pageant, a Pioneer Village is set up before each performance where attendees can learn more about pioneer life. Click here for more information.

The 2014 summertime Concerts in the Park series, held at Brigham Young Park (100 North State Street in Salt Lake City, Utah, USA) will continue on Tuesday and Friday evenings through August 29, 2014. The concert series began in 1996 and has been successful ever since.

On evenings when a concert is scheduled, 600 lawn chairs are placed in the park, but attendants are welcome to bring their own chairs or blankets. No tickets needed. In inclement weather, concerts will be held in the Assembly Hall on Temple Square.

Click here for a full calendar of gardening events, including how to extend your garden and prepare for seasonal change!

Brother Checketts has had a long and successful career in professional sports management. He has served as president and general manager and owner of professional basketball, baseball, football and soccer teams. He is currently serving as Stake President of the Yorktown, New York Stake. The Checketts have six children.

We will be uplifted and inspired by the missionaries of the DC North Mission as they share their testimonies both in spoken word and in music.

We will be privileged to hear the testimonies of new members of the Church of Jesus Christ of Latter-day Saints and to meet other new converts.  We will also have a guest speaker.

News From Utah Events Lds Life ConcertsEvents,Lds Life,Concerts,News From Utah
Comments and feedback can be sent to feedback@ldsliving.com