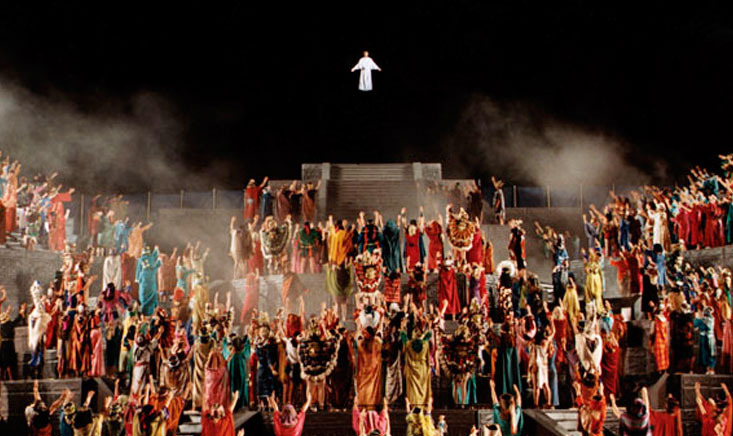 The Nauvoo Pageant is celebrating its 10th anniversary this year. It tells the story of the early persecuted saints who built Nauvoo. This year it will also switch off with the new British Pageant, which debuted last year in England and celebrates early church events in the British Isles. Click here for more information.

The Hill Cumorah Pageant began in 1920 when a small group of missionaries from New York celebrated Pioneer Day at the Joseph Smith Farm. The pageant has only grown since, and now takes place each year on the actual Hill Cumorah with the help of hundreds of volunteers each year. It focuses on events in the Book of Mormon, climaxing with Christ’s visit to the Americas and ending with Joseph Smith receiving the plates. For more information including time and location, click here.

Performed on even-numbered years, this local pageant portrays the settling of the frontier. Along with the pageant, a Pioneer Village is set up before each performance where attendees can learn more about pioneer life. Click here for more information.

Utah's 23rd Army Band will be performing in the Tabernacle on Temple Square on Saturday, July 5, 2014, at 7:30 p.m. This professional-level band provides music throughout the full spectrum of military operations and instills in our soldiers the will to fight and win, fosters the support of our citizens, and promotes our national interests at home and abroad. Click here for more information.

Friday and Saturday, July 18 and 19, at 8:00 p.m, the Mormon Tabernacle Choir and Orchestra at Temple Square will perform with special guest, Santino Fontana. This year's concert will be held in the Conference Center, and will be conducted by Mack Wilberg and Ryan Murphy.

Sontino Fontana is an award-winning Broadway actor, most recently renowned for his role as the voice of Prince Hans in Walt Disney's Frozen.

Free tickets are required. They are available on a first-come, first-served basis, starting Tuesday, June 17. Click here for more information.

Click here for a full calendar of gardening events.

Spanish night of music and inspiration, presented by the missionaries of the Washington D.C. North Mission. Free to the public.

Celebrate our pioneer heritage and the legacy of the Mormon migration. This story of the great westward trek will be presented in word and music by the Oakton Virginia Stake of the Church of Jesus Christ of Latter-day Saints. Free to the public.

News From Utah Events Lds Life ConcertsEvents,Lds Life,Concerts,News From Utah
Comments and feedback can be sent to feedback@ldsliving.com