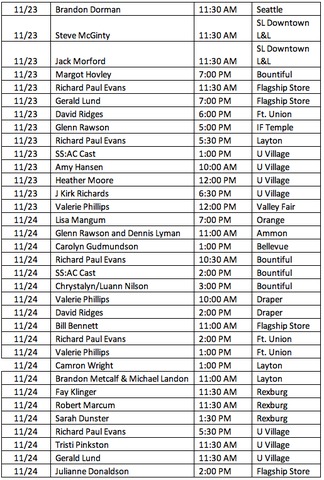 Start sending us your Christmas events! To request an LDS event be added to the calendar, e-mail details to events@ldsliving.com.

Lunch and Learn Series with Deseret Book Artists and Authors

November 23
Steve McGinty
Steve's education in Art ranges from studies at the University of Utah to travels in Russia, Paris and England. He continues his education through painting and studying with other artists, visiting museums and art shows, and reading art books. Steve admires the spontaneity and light of the Impressionists and the rich values of the Old Masters. He saw many of these works first hand in Russia and Paris, and has combined the strengths of these two schools to create his own style. Steve can often be found in a rural area or in someone's garden painting "en plein aire" with his fellow artists. He feels that the sounds, smells and atmosphere play an integral role in the true emotion of each painting. He is President of Plein Air Painters of Utah.

November 30
Justin Kunz
Justin is an American representational artist, teacher, and designer of United States coinage. He holds a Master of Fine Arts degree in Painting from Laguna College of Art and Design, 2011, and a Bachelor of Fine Arts degree in Illustration from Brigham Young University, 1999. Kunz’s paintings have been included in exhibitions throughout the United States and received recognitions including an Award of Merit in the Portrait Society of America‘s International Portrait Competition, a Visitor’s Choice Award in the LDS Church History Museum‘s International Art Competition, and a Director’s Award at the Springville Museum of Art Spring Salon. An inaugural Master Designer in the United States Mint Artistic Infusion Program, his designs include the 2009 Abraham Lincoln Commemorative Silver Dollar obverse and the 2008 Andrew Jackson’s Liberty First Spouse Gold Coin reverse. He is currently Assistant Professor in the Department of Visual Arts at Brigham Young University. His work is represented by Waterhouse Gallery in Santa Barbara, California, and Deseret Book in Salt Lake City, Utah. Justin lives with his wife, Heidi, and their four children in Utah, in the foothills of Mt. Timpanogos.

December 7
James Christensen
Combining keen observation with an endless supply of imagination has become the hallmark of James C. Christensen, one of the world’s most beloved artists. For more than thirty years, he has been translating the world around him into masterful and inventive art. Today, he will be at the Flagship Art Gallery signing his new book: Passage by Faith. Published by Deseret Book, this collection explores the spiritual elements of his work and unveils the visual metaphors, symbols, and “meaning behind the meanings” of some of his most popular fantasy pieces, as well as a few gems that have never been printed before. Beautifully designed with more than 60 images and comments from the artist this is a book that art-lovers of all ages will treasure. The artwork of James C. Christensen is prized in collections worldwide. He has won multiple awards from the World Science Fiction Convention and the Association of Science Fiction and Fantasy Artists, as well as the UT Governor’s Medal for Fine Arts.

**The Temple Square Lights will be lit on Friday, November 23, at dusk!**

The lights will be on nightly between dusk and about 9:30 p.m. through New Year's Eve; make sure to catch this amazing sight sometime during the season.

With the holiday season really gearing up, don't miss these great artist and author signings. Check for your local store to see dates and times of events near you:

The musical production Savior of the World, based on scriptural accounts of the birth and Resurrection of Jesus Christ, will return to the Conference Center Theater for the Christmas season. The show features a cast of talented actors, singers, and musicians sharing testimony through drama and song of the divine mission of Jesus Christ, the Son of God and Savior of the world. Get tickets.

Saturday, November 24, 7:00 p.m.
"Before Tonight: A Musical Nativity
The Visitors’ Center ushers in the Christmas season with a performance of “Before Tonight: A Musical Nativity.” This performance is a theatrical concert that weaves all-original music, ranging from gospel/pop to musical theater, with narration paraphrasing the Christmas story as found in the New Testament.

Friday November 30, 7:00 & 8:00 p.m.
Sandra Turley
Sandra Turley performed the role of Cosette in Les Miserables on Broadway in New York City and was part of the original closing cast. She also performed the role in the Shanghai, China premiere of Les Miserables alongside Broadway star Colm Wilkinson. She also has performed as Ariel in Disney World’s stage production of the Little Mermaid. Sandra released her debut solo album in March 2012.

On Wed., 11/28 through Fri., 11/30, the Inspirational Art Association (IAA) is hosting its third annual Christmas Art Showcase and Art Sale. A great way to get into the Christmas spirit, the family-friendly exhibit will feature original works of art by notable, religious and inspirational artists including Liz Lemon Swindle, Del Parson, Joseph Brickey, Sandra Rast, Linda Curley Christensen, Julie Rogers and Annie Henrie, and is FREE and open to the public. Artwork featured will include oils, watercolor, acrylic, photography, mixed media, sculpture, and stained glass. In addition to viewing and purchasing artwork, guests can also enjoy the Christmas atmosphere, music, and Dickens-era carolers.

The First Presidency Christmas Devotional will feature the Mormon Tabernacle Choir and the Orchestra at Temple Square. Members of the First Presidency will be the speakers. Find out from your stake or area if and when there will be a broadcast of the devotional in your area; click here to log in to your stake calendar.

*To request an LDS event be added to the calendar, email details to events@ldsliving.com.