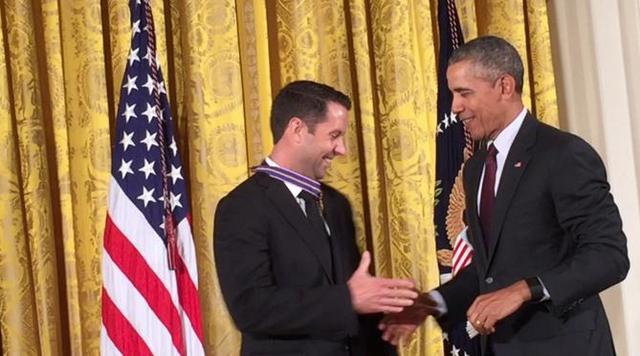 Special Agent Tyler Call of the FBI was off duty and with his family when he came across a woman being held at gunpoint by her ex-husband. Putting his life on the line, Call helped rescue the woman, and for that act of bravery, he was one of 13 law enforcement officers to be awarded the Medal of Valor this May.

"Each of these honorees acted without regard to their own safety," President Obama said in a ceremony in the East Room of the White House.

"We're so grateful they were there—some off duty, others on duty, and all rising above and beyond the call of duty. . . The men and women who run toward danger remind us with your courage and humility what the highest form of citizenship looks like."

Call was the only FBI agent to receive the Medal of Valor, which is the highest award a law enforcement officer can obtain. FBI director James Comey also presented Call with the FBI Shield of Bravery, which recognizes the courageous and exceptional acts of those who work with the FBI.

Call's wife, parents, and infant son attended the White House ceremony, according to the Deseret News. As the medal was being placed around Call's neck, his son cooed, prompting President Obama to say, "That’s your little boy cheering you on."

Other officers who received the Medal of Honor included: