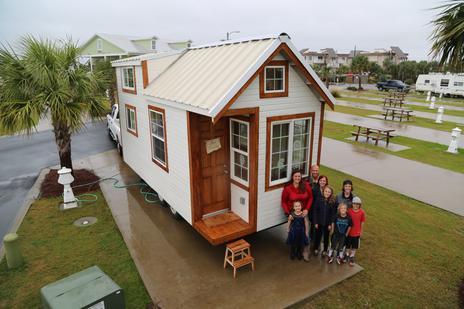 After building a brand new home and driving it 1,600 miles across the country to help out a family in need, the Slades didn't stop there. They found a way to turn the experience into a sweet missionary opportunity.

Here's one of the most touching moments from this story, when the woman who received the house from the LDS family praises them as her superheroes: "To be very exact, I think they set the bar for humanity," Lindsay Larson said. "These beautiful people have a sense of generosity, compassion and kindness unmatched by any others I have ever met. My goal from here on out is to instill in my daughter these traits that the Slades exemplify. What a world this would be if we were all on the Slade level."

Lindsay Larson had a dream of owning a tiny house.

After separating from her daughter’s father, Larson moved into a maintenance building on her workplace's property. The building frequently flooded creating less than ideal living conditions. Larson purchased the shell of the tiny house she had dreamed of owning. The house needed serious renovations, but Larson was on her way to her dream. Part of a growing trend, a tiny house is a smaller, fully functioning version of the average home. "The typical American home is around 2,600 square feet, whereas the typical small or tiny house is between 100 and 400 square feet. ... They enable simpler living in a smaller, more efficient space," according to thetinylife.com.

Her dreams were put on hold when flooding in Larson’s hometown of Pensacola, Florida, was declared a national disaster in April 2014. The flooding ruined the tiny house, but Larson didn’t let this deter her; she simply viewed it as a setback and began saving again.

More than 1,600 miles across the United States in Gilbert, Arizona, the Micah Slade family was trying to think of something special to do for its annual video Christmas card.