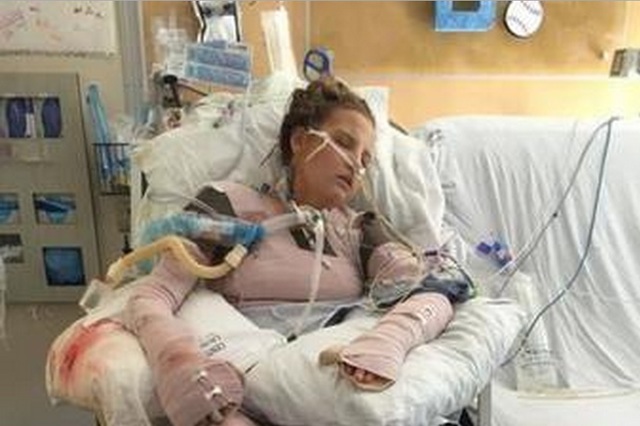 When the ATV that Baylee Hoaldridge, 15, was riding tipped on its side and burst into flames, Hoaldridge was trapped inside, stuck in her seatbelt until her grandfather managed to get her loose. But by that time, over 65 percent of Hoaldridge's body had already been burned.

The accident happened on July 4th in Mona, Utah. For the first month, Hoaldridge remained in a sedated state while she fought for her life. Now she is in the middle of a new fight—a fight to accept her scarred body and regain her self-confidence.

Recently, when hospital staff were cleaning her burns, Hoaldridge saw her own body for the first time.

But Hoaldridge has remained surprisingly resilient throughout her recovery, receiving support from some unexpected sources.

Stephanie Nielson, an LDS mother who had over 80 percent of her body burned in a plane crash, understands the psychological struggles Hoaldridge is going through and sent her a pillow as a simple reminder of where her beauty stems from. (Learn more about Nielson's miraculous story of survival and how she learned to love herself again here, or watch the Mormon Message featuring her story here).

And, shortly after the accident, Hoaldridge's aunt painted a beautiful portrait of Hoaldridge with her Savior—a painting that sits in Hoaldridge's hospital room, giving her strength every day.

We started the day off with a lot more questions than answers. We now feel we have more answers. Baylee's chest Xray... Posted by Be Brave Baylee on Sunday, August 23, 2015

For the next six to eight months, Hoaldridge will be staying in the Burn Unit at University Hospital while she receives skin grafts and physical therapy. To learn more about her battle and recovery, check out her Facebook page "Be Brave Baylee."