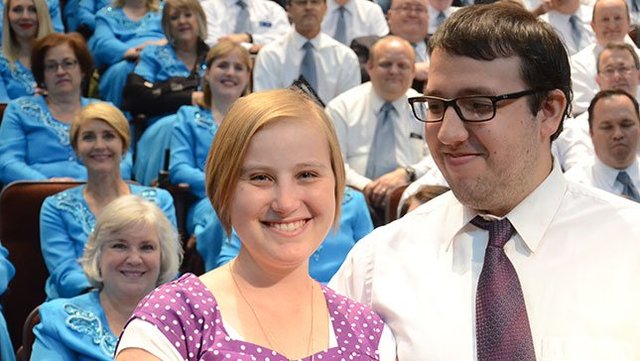 Thanks to the Mormon Tabernacle Choir Blog for making us aware of this story.

In 2007, 10-year-old Chase Burch sat in the hotel lobby with her family crying, her bright turquoise medical mask temporarily exposing her nose and mouth.

"How did they know?" she wondered as hundreds of members of the Mormon Tabernacle Choir surround the couch where she sat singing "A Child's Prayer." How could they have known this was the song she sang many times while battling medulloblastoma, an aggressive form of brain cancer?

This special concert held about 10 years ago could not have come at a better time for Chase and her family. Chase was heading into her second round of chemotherapy at the St. Jude's Children's Hospital in Memphis, her father had to return to California for work, and a close family friend had recently passed away.

According to a KSL documentary, the family wanted to see the Mormon Tabernacle Choir in concert but couldn't because Chase's condition would not permit her to be in crowds. While the family was expecting a few choir members for a private concert, they were blown away when they saw the lobby filled with members singing “Over the Rainbow,” “I Am a Child of God,” “The Battle of Jericho,” “A Child’s Prayer,” and “God Be with You Till We Meet Again.”

"That whole experience gave us the strength that we asked for that day," Chase's mother, Season Burch, told KSL in a 2012 follow-up interview. "It gave us hope, it gave us comfort and it was a real answer to our prayers to have the choir come."

Ten years later and the day after her wedding, a cancer-free Chase Burch Marmolejore turned to share her gratitude for the strength the choir gave her that day.

"We were just going through a rough time there and that kind of helped a lot,” said Chase, according to mormontabernaclechoir.org. "That was such an amazing experience, and I want to tell them that I love them."

In her 2012 interview with KSL, Chase also expressed her appreciation for the choir's performance after finding out she had been cancer free for five years.

"They're not just a choir," Chase said. "They're people who really love to do this and really spend their time doing it and I know that they care. They really do."

The special, private concert held 10 years ago also had a lasting impact on the members of the choir.

"There was no dry eye," former choir president Mac Christensen said about the performance in the 2007 KSL documentary. "It probably was one of the most spiritual things ever."