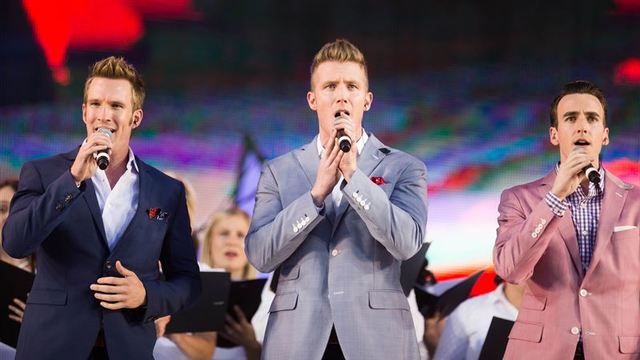 LDS Group Lands No. 1 Spot on Billboard Charts 2 Years in a Row

GENTRI is no stranger to the Billboard Charts. Their unique and stunning mashup of "What Child Is This?" with "I Wonder As I Wander" took No. 1 on Billboard’s Hot Single chart last year.

Their self-titled debut EP spent 10 consecutive weeks in the top 10 on two different charts including three weeks at No. 2 on both the Classical and Classical Crossover charts.

And this October, just after their release of their new Christmas album, Finding Christmas, the gents skyrocketed to no. 2 on the Classical Albums chart.

Now, GENTRI has claimed spot no. 1 on the Heatseekers Albums chart

Two years in the making, GENTRI's Christmas album began with a show-stopping performance of “Silent Night” before a Time Out for Women audience of 8,000 in Salt Lake City. The buzz that was generated by that first performance of their Christmas material has led to their highly anticipated full-length Christmas album.

The 12-track album (3 previously released and 9 new songs) features classics like “The First Noel,” “O Holy Night,” and, of course, “God Rest Ye Merry, Gentlemen,” all arranged and produced in GENTRI’s sweepingly epic and joyful style. The title track, “Finding Christmas,” is a poignant original song, a reminder of the deeper meaning in this time of year. This album will help you feel the true joy of Christmas, a joy that comes from celebrating the love and peace of the season.

Check out GENTRI's beautiful cover of "O Holy Night" from their album: