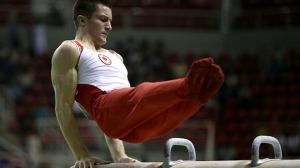 "It was difficult," returned missionary Jackson Payne said. "I went into my mission not knowing if I would ever do [gymnastics] again. It was terrifying. It was scary, but at the same time, my religion is very important to me. I knew that if I put my trust into that decision it would work out."

Jackson Payne has it all down, except maybe his timing.

Sometimes the lack of timing has been the young man's fault, like when he decided to embark on his Mormon mission just when he was coming into his own as a gymnast.

Sometimes the lack of timing hasn't been his fault, like when he suffered a torn right Achilles tendon weeks before the Pan American Games in Toronto last summer.

But as much as Payne's timing may not be the best, he has an uncanny ability to make up for lost time.

For instance, take the first weekend in June. The Canadian men's artistic gymnastic team has not qualified for the Rio Olympic Games, but there still is a spot open for one male gymnast to compete in Brazil.

Read the rest of this story at www.cbc.ca