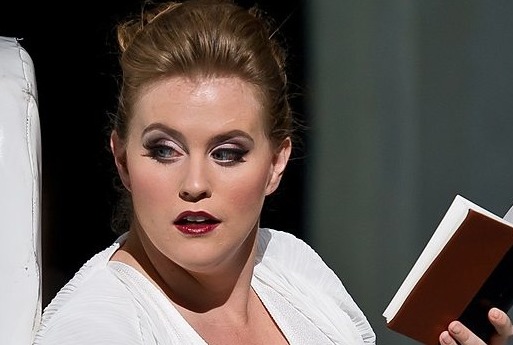 The road to the Met has been grueling, yet rewarding, for Rachel Willis-Sørensen, a returned missionary and young Mormon mom. At first, she didn't feel as if her voice had a place in the artistic world. Willis-Sørensen has a very bold, soaring soprano voice, and until she found opera, she wasn't sure she was going to fit in.

Soon after receiving her bachelor’s and master’s at BYU in operatic vocal performance, Willis-Sørensen launched her career and landed contract after contract at regional opera houses across the states.

She was ecstatic—yet nervous—when she was offered a contract to sing the coveted role of the Countess in Le Nozze di Figaro at the Royal Opera at Covent Garden in London. She had previously won the Metropolitan Opera National Council Auditions, which is a competition for young aspiring singers. She sang once on that famous Met stage as a young winner, but she had no assurance as to whether or not she’d be back.

While working towards her dreams, Willis-Sørensen and her husband welcomed a beautiful baby girl into the world. Willis-Sørensen proved to the world that she had the strength to be both an opera star and a mother—something that is not an easy feat, even for a seasoned veteran with an established career.

But her little family has only given her more people to celebrate her success with. Just recently, Willis-Sørensen nearly swept the board at the acclaimed Operalia competition, winning First Prize for Opera, First Prize for Zarzuela genre, and the Birgit Nilsson Prize. The Met certainly perked up and took notice of that, because now this young LDS mother will be reprising the role of the Countess in Le Nozze di Figaro—a role she excels at—on the Met stage this December.

Darrell Babidge, her current vocal coach, knows where Willis-Sørensen's success truly comes from: "It's been a fun ride seeing her ascend the precarious ladder of the operatic world," he says. "She has always been true to herself and the Church, and it has proven to be the hallmark of her success. I have been there for most of her important world debuts or competitions, and I'm sure the Met debut will be equally exciting."

To say that she’s elated would be an understatement. And to say that her start at BYU was a push in the right direction would be putting it mildly. Hear this Mormon diva talk about her music in her own words in this interview with BYU Magazine.