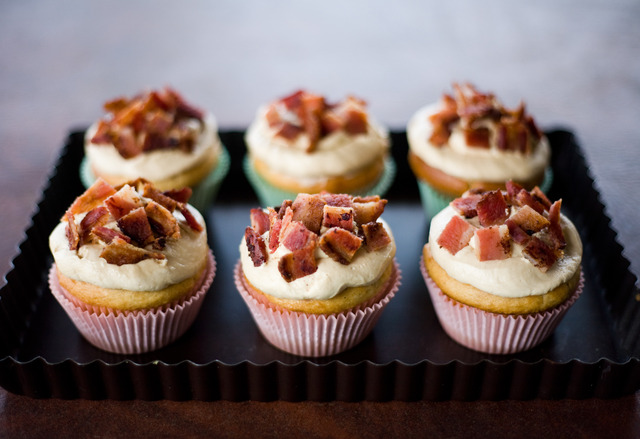 Wow. That's about all I can say. Wow. I'm not much of a fan of cupcakes or cakes in general--or frosting--favoring instead chewy gooey cookies and brownies, but these have officially won me over. I'm also not a fan of baking because I enjoy the more creative process of cooking, but again, these have won me over. I may end up baking my way through this entire cookbook.

There are several winning aspects of these cupcakes. I love that all the cupcakes start with a cake mix base, which makes them much quicker and easier to make, but you add in other ingredients (milk, sour cream, vanilla, etc.) to the batter to make them WAY better than a cake mix could ever be. The strawberry buttercream frosting is probably one of the most delicious things I have ever eaten. And can we talk about the visual wow factor as well? These are just adorable, and the two-toned cupcakes definitely impressed all the neighbors I took these to.

The recipe is also forgiving. I mixed up the amount of oil between the two different batters, and in the chocolate batter I used Mexican crema instead of sour cream because I ran out of the regular kind, but they turned out spectacularly in spite of those minor errors.

A true addict to anything Oreo, I of course jumped at the chance to make these cupcakes once I saw how much they actually involved Oreos! The cake was super easy to put together, and the extra sour cream made it taste as if it was homemade, even though half of it came from a box. And there's a secret surprise hidden at the bottom of the cupcake: an Oreo! And just wait for it—the frosting has Oreos in it too! (Could I be more in Oreo heaven?) Normally you’d crush the Oreos in a food processor and then add them to the frosting, but if you don’t have a processor like me, a Ziplock bag and your fist will do just fine. The recipe calls for 4-5 cups of powdered sugar, but I would definitely put in at least 5 cups. Otherwise, the cream cheese overpowers the Oreos. And we don’t want that to happen! These cupcakes are easy to throw together and a chocoholic’s dream come true. It takes about an hour to make and bake all of them, but you and your family will make them disappear in half that time!

The greatest benefit of trying to emulate the ideal pink lemonade cupcake meant that my wife and I made several dozen of them – and I got to enjoy a treat for days on end. While she may have also been disappointed that our frosting looked grainy, I didn’t mind the manifestation of the sugar I was eating. It was a good reminder of just how much of it I was putting down so, hopefully, I wouldn’t experience a nervous reaction again while working out.

I ate handfuls of these little pastries because they tasted quite delicious—certainly a bit tart, but combined with a sweetness that truly did remind me of my favorite beverage in bread form. For some reason, because of its color, the “lemon cupcakes” mentioned in the recipe more closely resembled the strawberry buttercream—the grainy stuff—we tried to swirl on top. Perhaps we mixed in strawberry puree with the cupcake mix? Or maybe the “plain yogurt” we were supposed to use was actually flavored?

It’s still a mystery to us. Whatever it was, they were great going down, make no doubt. I champion the taste.

Oh. My. I don't know if you've had a chance to partake in the dessert-with-bacon phenomenon yet, but it's totally worth the hype. These cupcakes were delicious. The individual parts left something to be desired (the cupcakes are a little eggy, the maple frosting just a little off), but together everything was PERFECT. This is a man's cupcake. I chanced to make it when several male relatives were visiting, and they seriously couldn't get enough. (Note: it is also a woman's cupcake, seeing as how I and my female relations also thoroughly enjoyed it, though perhaps not to the same extent.)

My suggested modifications are few, but I think they're important: As I said, the cupcakes are a little eggy. I wouldn't change the egg amount, but I might add a little more nutmeg next time to balance the taste a little more. I also added a dash of salt to the frosting and just the slightest bit of vanilla (which helped the flavor a lot); I used 1 1/2 teaspoons of maple flavoring, 5 cups of powdered sugar, and all the butter, though I originally thought it would be too much. I got the bacon from the butcher's counter and simply asked for the sweetest variety.

I highly recommend you make this cupcake soon. The men in your life will be especially appreciative.

Recipes from Your Cup of Cake--with 80 inspired ideas for quick, easy, and delicious cupcake creations. Get the recipes here.