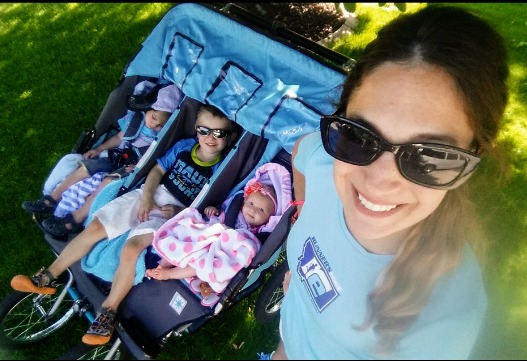 At three o’clock in the morning, 38-year-old Theresa Marie Pitts awakes with her 5-month-old baby. As a mother of eight children, she’s become accustomed to early-morning wakeups and feedings, but on the morning of July 9, 2017, her early rise was for a different reason. That was the day she would finally conquer what her kids had named “The Big Race.”

Pitts was getting ready to run the Missoula Marathon. It would not just be her first time running a 26.2 mile race; Pitts was trying to make it into The Guinness Book of World Records by running a marathon while pushing a triple stroller. Joining her for the run would be 4-year-old Evan, 2-year-old Anders, and her infant, Avrielle (“Avi”), in a stroller.

"The only thing that makes a good run better is being able to bring my children along with me," says Pitts. "Nothing else brings more joy to my heart than being a mother." 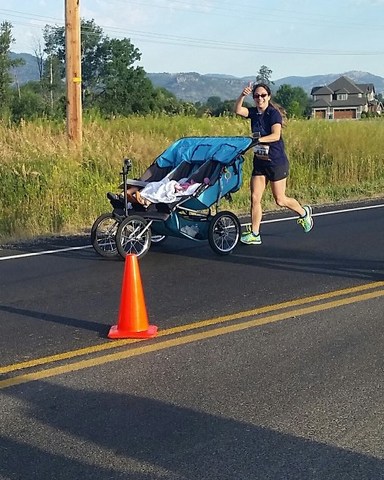 Her two oldest children, 17-year-old Brigham and 15-year-old Brooklyn, helped pack the minivan and drove Pitts and her young team to the starting line. They filled her stroller with supplies: blankets, food and water for the her and the kids, and GoPro cameras needed as proof to attempt the Guinness record. In all, she would push more than 150 pounds through the streets of Missoula, hoping to make it to the finish line within four hours and 30 minutes—the benchmark determined by Guinness to set the new record.

“For some time, I’ve been praying and asking the Lord to provide opportunities to go beyond the walls of my little home and ward and share my testimony with the larger community. He knows my heart and knows my desire to follow His lead and to do good with the gifts given to me.”

In May, Pitts qualified for a Guinness record when she ran a half marathon while pushing a triple stroller full of kids in just two hours. Based on her half-marathon time, a race prediction calculator suggested she could make the 4:30 marathon cutoff, but with little wiggle room. Pitts was up for the challenge.

“I am very competitive with myself,” she says. “I am very self-reflective and am constantly assessing where I can improve, making goals, and am working on those areas which need improvement.” For her, running has helped her set goals and conquer some trials. “Trials,” she explains, “that I could not have overcome without the Lord’s merciful hand.”

For nearly 20 years, Pitts has fought several bouts and deep slumps of depression. A decade ago, she added more scripture reading to her treatment. “The more I studied and the more I immersed myself in his gospel, the better I thought. And the better I thought the better I felt.” When she noticed her mental health take a dip in 2013, she felt prompted to start running on a regular basis. Pitts had never been a runner, but she trusted her prompting. “He knew that’s what I needed.”

While her older kids are at school, she jogs with her younger ones in a stroller and takes breaks to play in a nearby park. "If my kids really don't feel like a run or if there are just too many activities going on, I call it a rest day. My family and the well-being of my children always come first."

Although she exercises during her pregnancies, she backs off as her due date approaches. This year, within six weeks of giving birth to Avi, she was back out running with the kids, taking extra care to make sure her newborn was cuddled safely in the stroller. In preparation for the marathon, Pitts says the kids needed a little training; she and her husband altered their sleep schedules and taught Avi how to drink from a bottle so she could eat during the race. Everyone was as prepared as they could be for the big day. 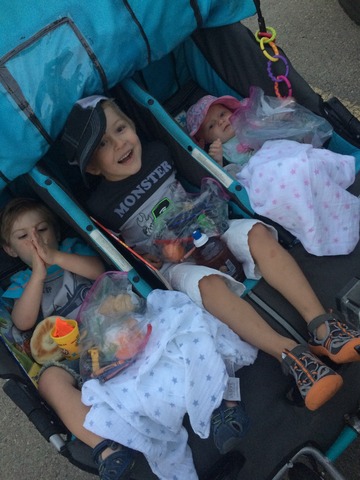 As the team started the race, Pitts was keeping her desired nine-minute pace. She stopped twice to help the kids. First, at mile six, she buckled Anders, who wiggled his way out of his seatbelt. Then, at mile eight, Avi needed help being burped and snuggled. Then the kids dozed off.

Every few miles she saw her older children waving on the sidelines, cheering “That’s my mom!” which gave her boosts to keep moving. But the temperatures began to rise, and at mile 16, fatigue began to set in. Pain gripped her calves and nausea crept up her chest. At mile 20, she hit the “wall,” unsure she could make it further.

“I prayed and said, ‘Heavenly Father, I need your help. Help me fight these doubts and keep going strong mentally and physically. Let the outcome of this race be thy will, and let me be at peace with whatever that outcome is.’ Praying helped me snap out of my moment of doubt, and somehow I tapped into extra reserves that I never knew I had.”

That’s when she noticed another runner nearby, also struggling. So she cheered him on.

“I said, ‘C’mon. Stay with me. We’ll help each other.’ The more I encouraged him and helped pull him along, the more strength I felt within myself.” She ignored the pain. She even ignored the time. She felt the support of her family and friends near and far and could feel the Lord’s pull toward the finish.

“He has basically taken me by the hand and led me every step of the way,” Pitts says.

As she approached the finish line, she saw the rest of her kids waving her in, cheering “Go Mom!” 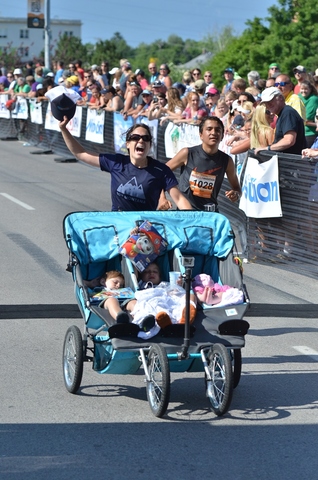 That’s when she noticed the time above the finish line: 4:25:37. She had made her record with just a few minutes to spare. Remarkably, even with the challenges Pitts faced, she earned a negative split, meaning the second half of the race was run faster than the first. “I was filled with excitement, relief, joy, and disbelief as I gave my three little ones big hugs and kisses and medals were placed around our necks.”

She hopes her victory teaches her kids about setting goals, facing trials, and keeping faith no matter the circumstance. “I think this is all a testament that the Lord does hear and answer our prayers. As we choose to live faithfully, miracles can and will happen.”

Mormon Life MarathonMarathon,Mormon Life
Comments and feedback can be sent to feedback@ldsliving.com