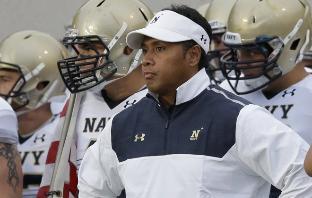 Ken Niumatalolo learned the X's and O's of college football from a variety of mentors, most notably Paul Johnson, his predecessor at Navy.

But what most separates Niumatalolo from his peers was a life lesson provided by his father.

With a victory over Army on Saturday, the 49-year-old Niumatalolo will become the winningest coach in Navy history. Now in his seventh season at the Academy, Niumatalolo (55-35) passed Johnson on the win list last year and is currently tied with George Welsh, a member of the College Football Hall of Fame who went 55-46-1 from 1973-81.

"I guess the word I think about is honored, just honored to be mentioned with those guys," Niumatalolo said.

Read the rest of this story at staradvertiser.com