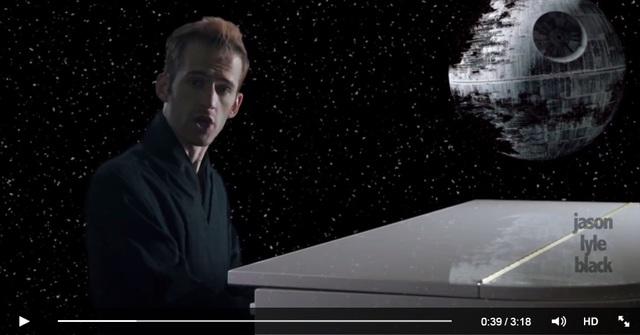 By now, many of you might be familiar with LDS YouTuber Jason Lyle Black. He's done quite a few incredible covers, from a "Frozen" duel to a song showing the evolution of Taylor Swift to an incredible cover of  Ed Sheeran's "Photograph."

But now, he's taken his music to a new level--to a galaxy far, far away in fact--by creating this funny though endearing song, "Shut Up and Duel With Me," a true love story that all Star Wars fans will love. And, for all of you Comic Con lovers out there, Jason Lyle Black will be appearing at this year's event in Salt Lake City on Saturday, September 26, from 3 to 5.

"Shut Up and Duel With Me" (Piano/vocal parody)

**UPDATE** - I will be at Salt Lake Comic Con this weekend!! Saturday from 3-5, YouTube booth. Come say hi if you are there!!**It's here! My newest parody, "Shut Up and Duel With Me," goes out to Star Wars fans, Comic Con-ites, and everyone who loves Walk the Moon. We have T-SHIRTS too! :)http://bit.ly/duelwithmeTshirtPosted by Jason Lyle Black on Tuesday, September 22, 2015