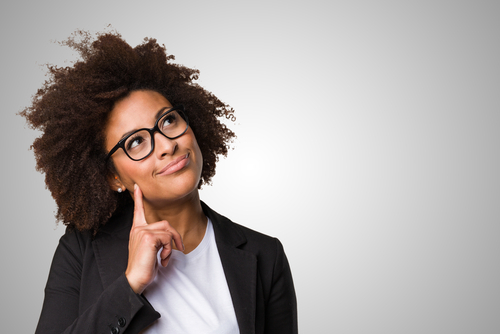 Latter-day Saint Psychologist: 3 Ways to Change Your Thinking and Increase Your Happiness

In my current employment responsibilities, I often meet with homeless individuals. Recently, I met with a man who had been homeless for many years. His clothes were tattered and dirty. He carried all of his possessions in a small backpack. We had met to talk about his mental health condition—specifically, any symptoms that might prevent him from working. He told me he had a history of anxiety and depression. While his anxiety symptoms had become more crippling, the depression had surprisingly lessened over time. I asked him why he believed the depression symptoms had decreased. He said, “I’ve been trying to think about all the good things in my life. Each day I get up and think about the good. I’ve found that makes me less depressed.”

Good in All Circumstances

I was shocked and humbled. Here was this man who had almost nothing. No home, no car, no money, only a handful of possessions, and yet he tried to maintain a positive attitude every day. I reflected on my own experiences. Many times, I’ve been “emotionally derailed” because of far less stressful events. I remember a few years ago I had just purchased new tires for one of our vehicles. The next day one of the tires went flat. A large metal spike caused the damage, but I had no idea how it could have been in the road and found its way to the tire. I was frustrated. I’d have to take more time out of my day, go back to the tire shop, get the tire replaced or repaired, and possibly incur another expense. For a moment I thought, “Why me, Lord? I’ve done my best to keep the commandments. Why should I have to endure such trials?” Frankly, I’m ashamed to admit I had such a thought. Not only did I have the resources to get the tire repaired, this was one of four functioning vehicles we owned at the time. One flat tire among 16 is pretty good odds.

So how could a homeless man with no car have a better and more grateful attitude than me? The answer is simple; it’s in the way we think about things. In almost all situations, our thinking influences our emotions and attitudes. People with mental health issues come into my office all day long. They typically come in because they have emotional problems. They are sad, worried, distraught, angry, depressed, hopeless, and stressed. They want relief from these experiences. One of the first things we do is talk about their thought patterns. As they gain greater insight into their thinking and can change how they perceive their experiences, their emotions start to change as well.

► You'll also like: LDS Psychologist: Changing Your View of Failure Will Increase Your Happiness

I was recently talking with a good friend about “bad days.” We have both had plenty. But she told me that even her worst days were not so bad when she stopped to think about all of the good in her life. It’s not that those days suddenly became great times, but as she considered all of her experiences, the good outweighed the bad. My wife reminded me of a similar experience in our past. One of our sons had been making poor decisions. His decisions caused particular grief to my sweetheart, who is a wonderful mother. She decided to make a list of those things that our son was doing that were upsetting her. She came up with five things. Then, out of fairness, she made a list of things he was doing in harmony with her desires. She came up with 25 things. While this did not eliminate the trial, it did help us both have greater clarity and perspective.

Some trials and stressors are temporary and easily managed. Some become chronic and evolve into long-term conditions such as anxiety, depression, etc. But no matter the trial or stress, in considering the extremely powerful role our thoughts play in our overall emotional and mental health, I have found three simple tasks that can help move us away from misery and closer to happiness.

It can be very easy to get caught up in the drama of negative life events. When things go terribly wrong, that can be all we think about. But as we have all likely experienced, focusing on the negative makes it more difficult to also see the positive. When Adam and Eve were cast out of the Garden of Eden, they experienced a stark change. They were no longer in the presence of God. They no longer enjoyed the ease and benefits of the garden, where plants bloomed without effort and all was at peace. They were cast into a bleak world where they both had to earn their keep through hard work and discipline. It probably would have been easy to mope throughout the day, looking longingly towards the Garden and regretting their decision. Yet Adam and Eve pressed forward. Despite their apparently crummy situation, they had good attitudes. Eve expressed the following: “Were it not for our transgression we never should have had seed, and never should have known good and evil, and the joy of our redemption, and the eternal life which God giveth unto all the obedient” (Moses 5:11). Eve looked for the good in her situation and she found it. We can do the same. I’m not suggesting we ignore the bad. I’m simply suggesting we look for the good as well. The next time you have a bad day, make a list of all the good and all the bad that is going on. In most cases, I believe you’ll find your “good” list to be longer than your “bad” list. This will help lift your mood and give you strength to get through the tough times.

► You'll also like LDS Psychologist: How to Unlock the Power of the Scriptures to Enhance Your Mental Health

Many years ago, I served a full-time mission in Mexico. The area I served in was very poor. The people had very little. They worked hard and usually only had enough to survive day to day. By first world standards, these people were in abject poverty. I suppose they could have had a lot to complain about if they chose. But I wish you could have heard them pray. In almost every case, their prayers were filled with expressions of gratitude. They were thankful for family, health, safety, sun, rain, blessings, trials, and so many other things. They would go on and on in expressions of gratitude for their various situations. It was remarkable. It has been more than 20 years since I served among those wonderful people but, it has influenced my own attitude on a regular basis. When I’m starting to get a little grouchy because the air conditioning is growing weak in one of my vehicles, I think of my Mexican friends and their grateful hearts. My attitude changes quickly. When things go wrong in your life, try to be grateful for the things that are going well. It’s okay to express your frustrations during prayer. But don’t do this to the exclusion of expressing your thanks as well. In fact, I would hope our prayers would include at least twice as much gratitude as complaining. As we make a conscious effort to do this, we’ll find our mood and happiness will increase overall.

Sometimes we get fixated on our own problems and think they are worse than anything else. This happened to young Nephi. After his vision of the tree of life and seeing the future of his people, he was overwhelmed with grief. “And it came to pass that I was overcome because of my afflictions, for I considered that mine afflictions were great above all, because of the destruction of my people, for I had beheld their fall” (1 Nephi 15:5, emphasis added). Have you ever been in a similar situation? Have you ever felt your afflictions were “great above all?” The reality is, our afflictions are never the worst; there is always someone out there who has it worse than us. There’s the old saying, “I used to feel bad that I had no shoes until I met a guy who had no feet.” The idea behind this saying is that even though we may have it rough, there is someone else who has it rougher. I have found this time and time again in my professional work. Even if we could find the most miserable, downtrodden person in the whole world, who has it worse that everyone else on the planet, we would still have to acknowledge the following: “The Son of Man hath descended below them all. Art thou greater than he?” (D&C 122:8). In the midst of our trials, we can try to remember that our afflictions are not “great above all.” I’m not trying to say your trials are not difficult. I’m saying that when they are cast in an objective light, they can appear more manageable. Employing this process will help us gain very valuable perspective. It will increase our objectivity and improve our mood.

We don’t have to wait for our circumstance to change before we can start to experience greater happiness and peace. The power is in us to change the way we think about things. It takes practice and consistency to make such changes. Don’t be discouraged if you find the process difficult. In fact, be grateful. Good, lasting outcomes result from demanding and arduous journeys. If you are trying to change decades of negative thought patterns, you’re not going to cross the finish line a week after you start. But if you are consistent and diligent, seeking the help of your Father in Heaven, you will move forward more joyfully. Keep trying and don’t give up.

Makes You Think Happiness Optimism ThoughtsHappiness,Optimism,Thoughts,Makes You Think
Comments and feedback can be sent to feedback@ldsliving.com