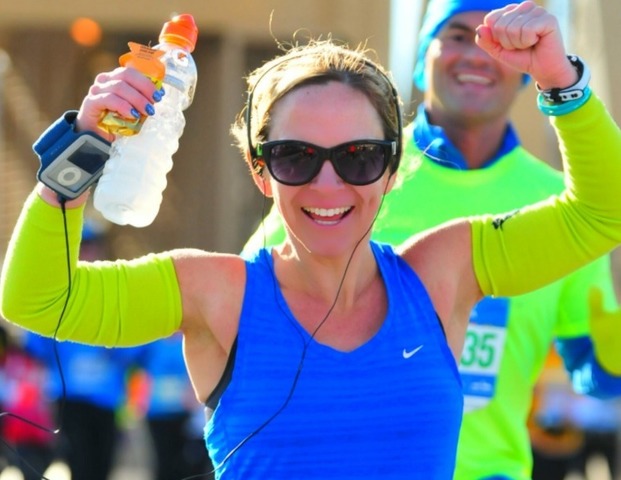 For LDS marathon runner Wendy Garrett, being able to walk a mile is a miracle, let alone run 26.2.

But, by turning her life over to the Lord, Garrett has found the faith and strength to overcome incredible odds.

In 2010, Garrett suffered an accident that rendered her left leg useless and left her with several neck and back injuries. For the next three years, Garrett lived with the pain and limitations, unable to work or find release in one of her favorite hobbies—running.  As these daily frustrations mounted, Garrett traveled from doctor to doctor, finding no help and no diagnosis.

"For three years, my life was in limbo," Garrett writes on Runner's World. "I went from doctor to doctor only to be diagnosed a 'mystery.'"

But, during this time, Garrett found solace through the ultimate source of strength and peace.

It wasn't until Garrett's 25th doctor that she finally found a degree of respite and hope. The doctor diagnosed Garrett with a spinal cord injury and fitted her with an orthotic that provided enough support to allow Garrett to begin walking—and eventually running—on her own.

From the time of her diagnosis, Garrett's stamina and strength rebounded with a vengeance. Just a year later, in 2014, Garrett ran in her first Boston Marathon. While the race gave Garrett an opportunity to celebrate her miraculous recovery, the event proved a bittersweet experience.

"My sister passed away from colon cancer just months before the Boston Marathon," Garrett says. "I was broken; I didn't think I could do it."

Bound and determined, Garrett decided to run in memory of her sister, despite a knee injury and the emotional upheaval caused by the loss. "Running ended up helping me through the grieving process," she says.

But Garrett didn't stop there. That fall she ran her personal best at the New York City Marathon. That following spring, Garrett ran her second Boston Marathon, securing another personal best and placing fourth in the Women's Mobility Impaired category.

"Running has saved my life," Garrett says. "Before the NYC Marathon, I suffered from severe depression . . .but running helped bring me back to finding myself and working through yet another loss. Running reminds me to take life one step at a time."

And from these challenges and the painful steps she's had to make towards recovery, Garrett has gained a new perspective.

"Some of the trials in our life eventually make sense and we understand why it happened," Garrett says. "However some things we go through may never make sense to us and these trials are the hardest. I think this is God's way of testing our faith in Him. Sometimes we just have to let go of the past and trust His plan is better than ours."

Garrett's story of recovery and determination to overcome despite any obstacle has inspired runners across the world. In fact, Garrett was recently selected as a semifinalist for the opportunity to be featured on the cover of Runner's World. To vote for Garrett's story or view other stories, click here.