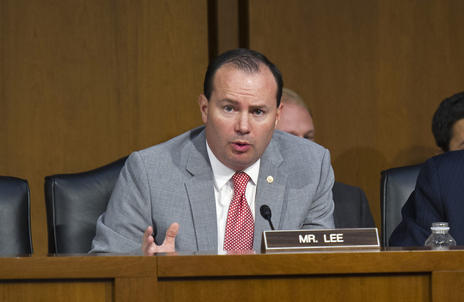 MR says: What a touching tribute that highlights the empathy, the quick wit, the humor, the passion, and the unfailing example of this inspiring apostle!

Here is what Sen. Mike Lee had to say:

"I rise today to pay tribute to Elder Richard G. Scott, a member of the Quorum of the Twelve Apostles of the Church of Jesus Christ of Latter-day Saints who passed away September 22, 2015, at the age of 86.

"Richard G. Scott has the razor-sharp mind of an engineer fused with the tender softness of a disciples soul. A graduate of George Washington University in mechanical engineering, who did post-graduate training in nuclear engineering, he had a brilliant mind with an uncanny capacity for formulas, projections and calculations. Yet, he became known throughout the world for an enormous heart with an equally uncanny capacity to love and to have empathy for people from every walk of life.

"Elder Scotts gentle voice invited all who had lost their way, who had given up hope, or had wandered far - to come home - home to the faith, family and community that would bring them real peace and lasting, genuine joy. Countless individuals around the world heard his invitation to come home and rightly felt that he was talking directly to them. Ever in search of the one who was lost Elder Scotts words and witness of Jesus Christ served as the lower lights upon the shore to gently guide many a wanderer home."