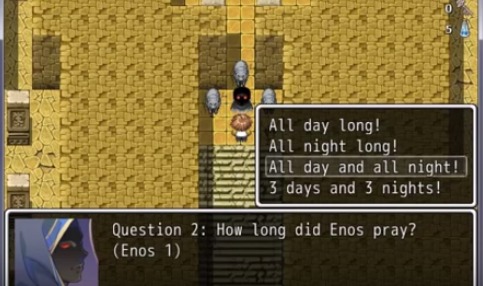 Video games allow us to do things we otherwise couldn’t. Through a console, we can carry out military objectives, play professional football, and even catch Pokemon. Now, thanks to the brilliant creativity of one LDS teen, we can use video games to experience Book of Mormon times.

Levi Hilton, a 14-year-old from Orem, Utah, is the mastermind behind Book of Mormon Heroes: The Servant of Helaman. Revolving around the Book of Mormon story of the unnamed Nephite who kills Kishkumen (see Helaman 2), the game allows you to experience life in the ancient Americas—from the clothing worn to the money used.

“One of the things I want this game to do is make people feel that the Book of Mormon is real,” Hilton said. “I’m trying to make a game that follows the story in the scriptures. The world map is based on the description of where the cities are listed as being in the Book of Mormon. And the type of money used is the same as in the scriptures. There are also many other . . . references like these.”

It was at school where Hilton was first introduced to the possibility of making video games. After learning some minor coding, he “got really into it and started making apps.” After his parents bought him the technology necessary to make games, he got to work—and that work has paid off. “Now I can use this software to its full extent.”

Hilton says that, besides being fun, the game can be spiritually enriching. “There are lots of references to the scriptures,” he said. “For instance, bad guys quiz you on your scriptural knowledge before battling with you . . . I think that this game will help others learn a lot more about the scriptures.

Before creating this game, Hilton says he viewed the Book of Mormon as “just . . . God’s commandments in a book.” But now, after intensive study of the scriptures during the game-making process, he says, “I realized it is an actual history of ancient people. I know that I love the Book of Mormon so much more now than I did before I started working on the game.”

And there’s more good news—Hilton isn’t finished. A sequel, The Servant of Teancum, will cover Alma 46-62, and is scheduled for release in late September or Early October. “I’m very excited about this game,” said Hilton. “I think it has a lot of potential.”

UPDATE: Hilton's sequel, The Servant of Teancum, has been completed and is available for download here!