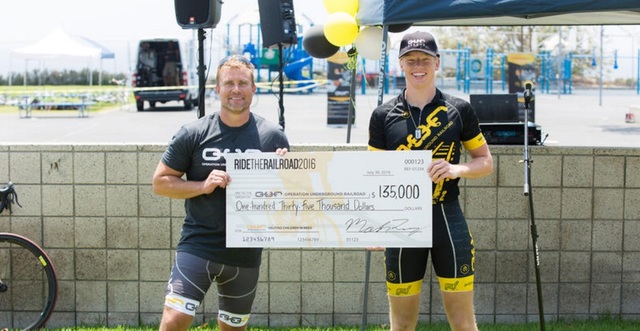 One summer night in Utah, LDS teen Mark Tenney sat at a dinner party with Timothy Ballard, founder of Operation Underground Railroad, an organization that rescues children from sex slavery. Upon hearing Ballard speak that night, Tenney knew somehow he needed to find a way to help his cause.

Now, two years later, Tenney, 17, recently handed over a check for $135,000 to Ballard after organizing "Ride the Railroad," a charity bike event that took place this past July. Although it took him 700 hours of work the past year, around two hours each day, Tenney says he is grateful for the experience not only for the money raised, but for how it strengthened his own faith.

That night two years ago is something Tenney will never forget. Ballard told his story of originally working with the government and then feeling inspired to begin his own organization. Ballard spoke of the prayers he has said and the promptings has felt.