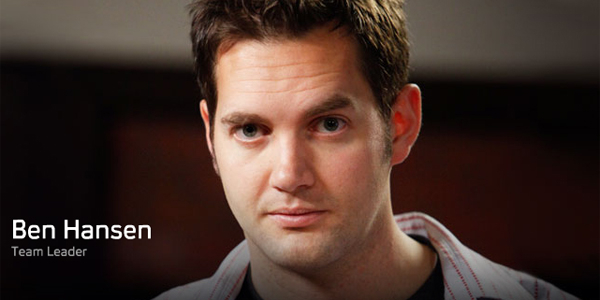 Ben Hansen once climbed into a cage, then stared great white sharks in the eye as the cage was lowered into the water. "I thought that if I could do that . . . I could do anything in life," Hansen later said. That experience, daring though it may have been, wasn't the scariest thing he has ever had to do. It took him four more years to get up the courage to make the ultimate committment—buying an engagement ring.

Hansen is no stranger to scary stuff. As the host of Syfy's Fact or Faked: Paranormal Files, Hansen explored some of the world's darkest secrets. He and a team of researchers investigated UFOs, hauntings, and other paranormal phenomena. "I might find myself on location in places such as Iceland looking for a lake monster, or in Australia looking for mermaids," Hansen said. "I think I'm pretty lucky to be getting paid for having so much fun."

Whether fortunately or unfortunately, most of the cases Hansen investigates have a simple, mundane explanation. Perhaps the wind blew through cracks in a room in just the right way and it was mistaken for a ghost whispering. Still, it's not always so clear cut. "There's about 5%-25% of them that I haven't been able to resolve both on or off the TV show," he said.

"Not all cases have natural or hoax explanations," he continued. "I've seen some of the craziest phenomena anyone can imagine . . . I've witnessed bluish circles of light appear and fly straight through a wall. I've heard audible voices speak full sentences near me when no one else was there. I've seen objects move across the room seemingly by themselves. I once watched a pile of leaves in a cemetery depress in the shape of a footprint right in front of me."

Hansen maintains a definite belief in what many would consider conspiracies or paranormal occurrences. "I'm convinced that the UFO phenomenon is real," he said. But how do these beliefs coincide with his religious beliefs as an active Latter-day Saint?

"[People] wonder if I've ever seen or experienced things that make me question my faith. I tell them, 'absolutely not.' Yes, while it's true that I've seen many things most people would find hard to believe, there's nothing I've experienced that makes me doubt the gospel. It all fits in somehow . . . the universe is filled with mysteries, and I'm okay waiting a bit for the answers."

Partly due to his television career and partly due to what he describes as "committmentphobia," Hansen waited until he was 37 to get married. "I think, like many men, I was nervous about the responsibility of marriage," he said. "I wanted to make sure that I was ready to provide for a family. He met his wife, Kelli, shortly after his missionary in Chile. The two remained friends, having an on-again, off-again relationship until they finally tied the knot just over a year ago.

"I must have driven her crazy," he said, "but eventually I came to my senses and realized she was the best thing in my life." Hansen and his wife do not have any children yet but are excited at the prospect of starting a family.

As a young man, Hansen served a mission—but he's still an effective advocate of the gospel. "In my day-to-day life, I think I share the gospel most effectively when people first come to know me as a good person. I figure that I first have to be a great example of living my life by faith or they won't be curious to know what I know. Because I work with so many people in the TV industry and on the different lecture circuits I travel, I probably have more non-LDS friends than friends within the Church. If the subjects of life after death or life on other worlds comes up (which it often does in my line of work), I often chat to them about the Plan of Salvation . . . I've [also] had quite a few email discussions with fans of the show who really want to know if there's more to our existence after death. I'm certain I wouldn't have had so many opportunities if it wasn't for the industry in which I work."

Hansen's co-workers often apologize to him about taking the Lord's name in vain, even though he doesn't even mention that it bothers him. "I really appreciate that level of respect we have for each other," he said. Hansen also finds that people are typically very respectful of the fact that he doesn't drink.

The gospel provides Hansen with hope for the future. "We live in very strange times," he said. "There's far too much negativity, complaining, and destructive criticism in our generation. I believe you can change your life 180 degrees and get much better results if you control the influences you let in . . . I'm not a touchy-feely guy, but I've learned that people are what really matter in life. If you approach everything you do from the perspective of love . . . I think you'll find a lot more people will want to be around you."

This hope helps Hansen keep his priorities where they need to be. "Because I work for myself and we don't have children yet, I can put in 14-hour days without even blinking," he said. "My wife gently reminds me that faith also includes trusting that the Lord doesn't expect me to do it all on my own. If I'm diligent in doing my part, He'll make sure that we're taken care of while still allowing me to be present as a husband."