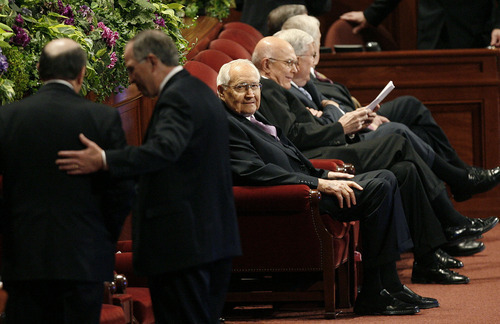 Earlier this week, Elder L. Tom Perry was hospitalized for breathing troubles. Though the Church announced that Elder Perry was released from the hospital and was resting at home Wednesday night, Friday, the Church gave an important update on Elder Perry's health:

“Elder L. Tom Perry will begin radiation treatment this morning after being diagnosed with cancer in the thyroid gland." They noted that, "Elder Perry is the second most senior apostle in terms of length of service in the Quorum of the Twelve, and the oldest living apostle."

"Elder Richard G. Scott, age 86, was hospitalized last evening due to gastrointestinal bleeding," shared Eric Hawkins, Senior Manager of Media Relations for the Church Public Affairs Department. "The bleeding was brought under control and he is resting comfortably."

Additionally, the Church noted, the two brethren "are grateful for the prayers and kindnesses expressed on their behalf.”

-->Related Reading: Why anyone who says the apostles are too old is wrong

Don't want to wait for your tour or can't make the Payson Utah Temple open house? Check out the beautiful interior photos the Church has released of the of the soon-to-be dedicated temple.

Photos from the Mormon Newsroom

-->Check out the complete gallery here

3 Myths in Mormon Culture That Make Us Miserable

During my years as a clinical therapist, I’ve witnessed how faulty spiritual equations can cause some Latter-day Saints great emotional pain and rob them of happiness and peace. These ideas are often not out in the open, but are instead internalized beliefs that can distort our thought patterns and our emotions. Here are three common spiritual myths:

Myth #1: I should be perfect now, and perfect means flawless.

One of the most commonly quoted (and seemingly misinterpreted) scriptures is Christ’s command to “[b]e ye therefore perfect, even as your Father is in heaven is perfect” (Matthew 5:8). It can be quite daunting to consider this lofty expectation, and it can be extremely frustrating and disheartening when we fall short of it.

-->Learn the other myths that might be making you miserable

A Good Reason Why the Church Has More Missionaries, But Not More Baptisms

University of Tampa associate professor Ryan Cragun said the LDS Church not using more missionaries in potentially fertile conversion areas suggests lowering the age was to prevent young church members from straying from the religion during the gap years that used to come between high school graduation and the start of missions.

Young people, no matter their religion, tend to begin questioning their upbringing and discovering new ways of thinking after leaving home for college, said Jan Shipps, a retired religion professor from Indiana who is a non-Mormon expert on the church.

-->Read about some of the other factors here