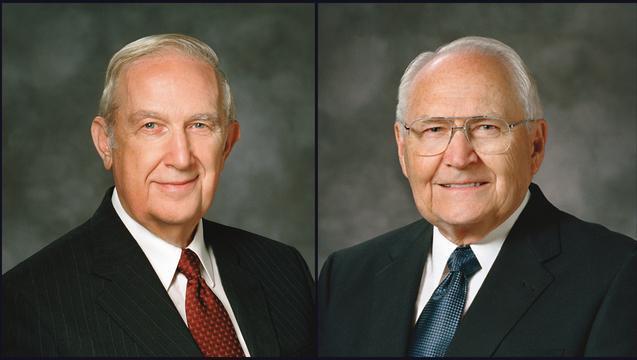 Word also came that Elder L. Tom Perry, who was diagnosed with thyroid cancer last week after being taking to the hospital with breathing difficulties, is also resting at home. However, the Church statement said, "He is receiving General Authority visitors and conducting Church business. The 92-year-old apostle continues to receive medical care."

The Church has expressed that both men "are grateful for the prayers and kindnesses expressed on their behalf."

-->Related Reading: Why anyone who says the apostles are too old is wrong

The First Presidency announced that a new online donations website will be released this year. "Donating online is an alternate method to contribute to the Church, similar to giving the donation to your bishop or branch president," shares a new "Online Donations" page in the Help Center on LDS.org.

"Historically, donation envelopes and contributions were given to priesthood leaders in each ward and branch," a news release explains, "In the future, this same process may still be used. However, for those who wish, they may make their contributions through the online donation system developed by the Church."

Though the system is currently in Beta testing only (invited users can pay tithing online as they pilot the program), the Church expects that "the Church Online Donations website will be rolled out to congregations in the US throughout 2015, and the Church will notify local leaders when it is available in their area."

Saturday, April 25, in Nepal the Lord watched over His saints. The tender mercy when the 7.9 earthquake hit was the members of the Kathmandu branch were sitting together in the chapel having sacrament meeting, according to Nepal's cultural traditions. Being together made all the difference.

For a very small branch in a city with four million people, being together at the time the quake hit meant they knew who was safe immediately. Communication in Nepal is often spotty at best, so this information was critical. The members evacuated the chapel and huddled together away from the buildings.

-->Read about other miracles from the quake

Elizabeth and Ed Smart are working with Provo Police to help find Elizabeth Elena Luna Salgado, the Provo woman who has been missing for more than a week.

Smart said “Someone knows where Elizabeth Salgado is, and they need to find her.”

Elizabeth Elena Laguna Salgado was last seen on April 16 leaving the Nomen Global Language Center. Her family told police this is highly irregular of her and have told many that they believe she’s been kidnapped.

In response to rioting and violence that has shaken downtown Baltimore this week, six LDS missionaries serving in the area have been temporarily reassigned to nearby suburbs. The three companionships of elders had been serving in the Inner Harbor Ward and the Alameda Spanish Branch, both in the Baltimore Stake, and the Brooklyn Park Branch in the Annapolis, Maryland Stake.

-->Read more about the missionaries here

12 Most Common Ways People Start Talks (for Better or Worse)

Ever wondered how to start a talk? There are many common ways members start sacrament meeting talks. We have all heard and probably done at least a couple of them. After asking what are the most popular ways people start LDS sacrament talks, this is what we came up with.

Who was Webster and why do we go to him for answers most of the time?

Webster’s used to be the go-to dictionary of many members, but several young people now quote from online dictionaries like dictionary.com. If the member is a person with a lot of education, he or she will probably use the Oxford dictionary definition.

-->See the other most common ways people begin their talks