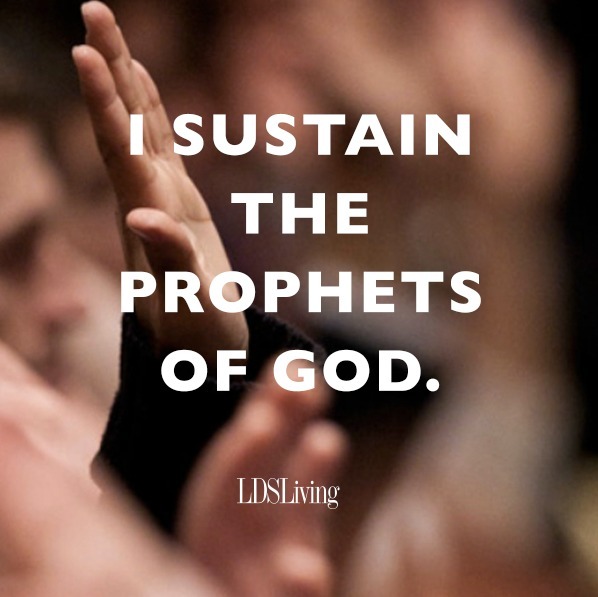 Church members participating in the afternoon session of the 185th Annual General Conference of The Church of Jesus Christ of Latter-day Saints witnessed a rare event in general conference history: a sustaining vote that was not unanimous.

-->Learn about other dissenting votes in conference history here

Though unexpected, some used the moment to reaffirm their faith.

-->Read about one experience from the Conference Center

Many members in support of President Thomas S. Monson and the other Church leaders have responded in the way of today: social media. The #isustain campaign has flooded Facebook, Twitter, and Instagram with users posting their love and support for their beloved leaders.

-->See our FHE lesson about sustaining the prophets

Changes Made at General Conference

The First Presidency of The Church of Jesus Christ of Latter-day Saints announced five new General Authorities, a new Young Men general presidency, a new counselor in the Primary general presidency and 53 Area Seventies, at the Saturday afternoon session of the Church’s 185th Annual General Conference.

Many members were caught off guard this conference when President Thomas S. Monson, 87, did not give his customary greeting during the Saturday morning session of general conference. President Monson did later give addresses at the Priesthood session, and again on Sunday morning.

In a surprise move during the Sunday morning session of general conference, President Thomas S. Monson announced three new temples to be built:

It has been two years since the Church has announced a new temple, as there has been a focus on finishing the 31 temples that are still under construction or undergoing renovation.

-->See the current status of the other temples being built

In 1980, an entire Nivaclé native tribe of 200 people converted to the gospel when missionaries told them the story of the Savior visiting the Americas. The leader of the tribe recognized the story as one passed down from their ancestors and knew he was hearing restored truths.

Today this tribe lives in a community of around 40 LDS families and has renamed their settlement Abundancia, Spanish for “Bountiful.”

-->Discover this and other facts about the Church in Paraguay

What I Learned the Hard Way: How to Protect Your Family on Instagram

As years have gone by, I have posted photos of the exterior of our house to share excitement in the building process and even exposed what city we lived to curious readers. I have posted multiple photos of my little Lucy in her diaper (etc.) because I love sharing little motherhood experiences. We would also post photos while we were on vacation. I completely put myself out there.

As my following grew, I was really naive about the messed up people on the Internet. I assumed all my followers were these cute young girls, aspiring to be videographers or waiting for missionaries. To be honest, I got caught up in the numbers, and I stopped looking at who started following me. This is where the frightening part happened.

-->Read her full story, and learn how to protect yourself and your family

Need some ideas for decorationg a cultural hall wedding reception? Check out these amazing photos and be inspired.

-->Check out the full gallery