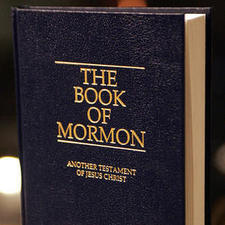 Book of Mormon Stands Up to Modern Criticism

From Modern Archeology: In the late 1820s, when Joseph Smith announced that he’d recovered an ancient book that had been written on metal plates and concealed by one of its authors in a stone box, his claim was widely derided. It still is.

But the idea of an ancient book hidden up to come forth at a future time no longer seems quite so ridiculous — not, at least, to those who’ve been following the relevant archaeological developments.

In 1945, for example, a number of Christian manuscripts were found in Egypt at Nag Hammadi, ancient Chenoboskion.

-->See what else has been unearthed

From the scholastic standpoint:

Yale student: Where is the original Book of Mormon today? Where are the gold plates?

Taylor: They are gone.

Yale student: What do you mean that the original plates are gone?

Yale student: I mean no disrespect, but this sounds both incredible and convenient for the story of the Book of Mormon. (Remember that the word “incredible” means unbelievable.) We have no way of source checking Joseph Smith’s story because the plates he claims to have worked with are no longer available. How can anyone even believe Joseph Smith or the Book of Mormon?

Two weeks ago, Stampin’ Up! CEO and co-founder Shelli Gardner stood in the center of a well-lit stage in Orlando. She’s broken news to their independent demonstrators many times during the company’s 27-year history, but this announcement was different.

This speech wasn’t about finances, compensations or product rollouts. For the company with revenues in the millions — as in, hundreds of millions — plus 450 employees and more than 40,000 demonstrators in 10 countries, this announcement was about something much more valuable.

With 1,600 in the audience and thousands more watching online, most of whom are not members of their faith, Gardner revealed that she and her husband Sterling are stepping down from the company to step up to a fulltime mission for The Church of Jesus Christ of Latter-day Saints.

-->Find out the company's response

"There is a greater purpose in life than basketball, and there is much more going on in the world than whether the Celtics win or lose. And my happiness is not predicated on whether the Celtics have won or lost. But I do believe in doing your best. And I do believe in winning, and that you have to do all you can to succeed at what you're doing. Because there is relevance."

-->Read more of his testimony here

I have picked out my son’s outfits almost every day of his three years on this planet. I thought it would be fun to turn the tables and let him pick my outfits out for a few days. How crazy could it be? I like everything in my closet, and I mix and match items all the time. Well, let’s just say it was interesting. And above just being interesting, it was a fun experience to have with my little guy. I also learned a few things from my pint-sized fashionista.

-->See what fun outfits this little boy made for his mom

6 Ways Mormons Can Enjoy the Spirit of Lent

Though Latter-day Saints don’t observe the traditions of Lent, we can always learn a thing or two from it as we search for things that are of good report and praiseworthy. After all, we can always use a reminder to be better and have a more meaningful Easter.