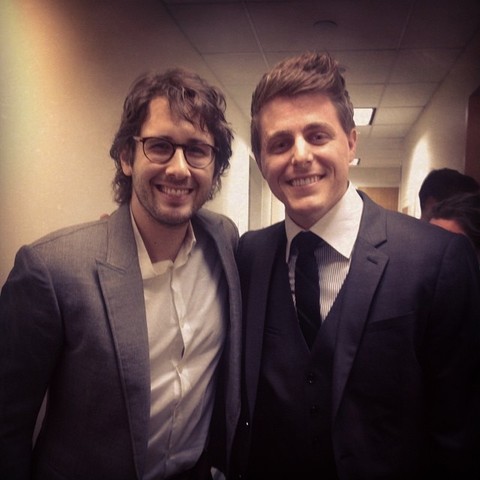 Remember that time Josh Groban worked with the LDS makers of Kid History to shoot a hilarious video? Well, he's back in LDS news again, this week in a fun photo with LDS concert pianist Josh Wright!

Here's the quick version of the story: at his Carnegie Hall debut, Josh Wright played for a number of big-name stars, including Josh Groban, Piers Morgan, and many members of the Huntsman family. The picture itself was just a 10-second interaction backstage that Josh Groban was really cool about. Neat!

Read more about Josh Wright's experience at his Carnegie Hall debut over at the full story.

Did you know that some things you use every day were invented by Mormons like you? This list went crazy this week! From hearing aids to traffic lights, from eletric guitar amps to the television, this list had a lot of our readers excited--a few even shared a few more inventions. One reader explained how their LDS grandfather invented the modern steam iron and another even told us that they believe inventor of Atari's famous game Pong was invented by a former Mormon!

Check out our list and make sure you read the comments for more from our readers about other Mormon inventors!

Poll: When is Your Favorite Sunday Church Time?

This seemingly innocent question got a whole lot of hype on our site this week: when is your favorite time for church? With the way most LDS wards rotate their meeting times annually, almost everybody has an opinion about when the best meeting time is.

Currently, the voting stands thus: 8-9 a.m. church in first place with 45% of the votes; 11 a.m. or noon church in second with 41% of the votes; and then a huge gap with afternoon or 1 p.m. church pulling up the rear with 5% of the votes. But the question still remains--what's your favorite time for church?

When most young LDS men choose to serve a mission or not, they're not often faced with alternatives like millions of dollars and a dream come true of playing in the NBA. But Jabari Parker is faced with just that. At the end of the current season, Parker could either stay at Duke and finish his collegiate basketball career or be drafted into the NBA (as possibly a top-three pick) or--as a third option--serve a mission for the Church. It seems that everyone has an opinion on what Parker should do, but we trust that he'll be led by the Spirit and choose the right path for his life.

(This week also brought us a chance to learn more about this great LDS athlete off the court--check it out!)

Taking Offense at Church: Only With Your Consent

This article really hits home for a lot of people who know someone who left the Church because of being offended or who left the Church themselves after taking offense. The author tells his own negative experience with a leader, and then explains the difficulty he had forgiving that man.

This gem of an article really gives a dose of hard yet healing medicine when it says, "For these situations, ultimately you’re going to have to forgive them and move forward in your life and not allow that individual to dictate how you should feel going to church, how you feel at home or how you feel as you live your life."