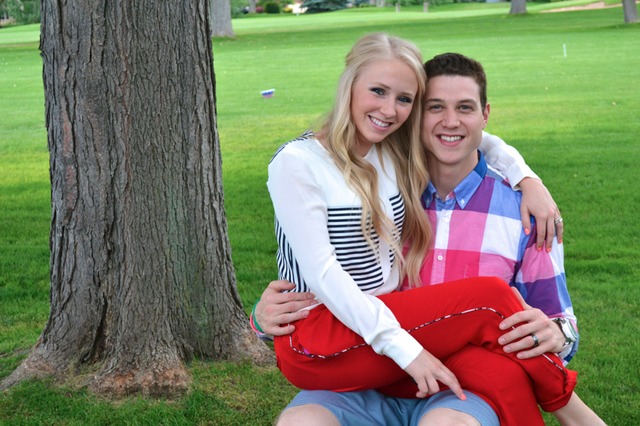 Jimmer and Whitney Fredette on Life as Mormons

While Jimmer Fredette isn't your average Mormon, a new interview from Normons.com (Normal Mormons) reveals a lot about how his life as a Latter-day Saint in the NBA, an experience he says has brought him much closer to God.

"You’re definitely under a microscope when you’re playing professional sports or doing anything high profile," he shares. "But the thing is, I’m not doing all this to put on a show. I’m doing it because I truly believe in the church and believe in the gospel and this is how I want to live my life. So it doesn’t really bother me that people see what I’m doing because I know that in my heart that’s what I want to be doing." And of course it doesn't hurt that once after practice, he found a voicemail from Elder Ballard waiting for him!

(Oh, and in case you were wondering, Jimmer doesn't actually use the phrase "you just got Jimmered"--it sounds too weird to him.) Don't miss the full interview for more great Jimmer tidbits, including some from his wife, Whitney!

Gain Self Confidence & Keep it

LDS author Michelle Wilson of Does This Insecurity Make Me Look Fat shares how Latter-day Saints can both gain more confidence in themselves and keep it: don't be decieved by criticisms, get a heavenly perspective, cherish trials, and give yourself a pep talk. As she says, "You are all right, and everything will be okay. Know this: You are doing better than you think you are. You are stronger than you realize. You will make it through."

Get pumped up and read the full article here.

Photo from The Blaze.

While "Tiger Mom" Amy Chua (pictured above) is known for her controversial opinions, her latest book makes a claim that interested us: Mormons and Jews are more successful than other religious groups. While we don't agree with most of what she says in her recent claims, we did have our own thoughts on her reasoning for why Latter-day Saints tend to be more successful:

1) Mormons believe they have a responsibility to live and share the fullness of the gospel. (She rather bluntly calls this a "superiority complex.")

2) Mormons believe that nobody is perfect, and that we can always strive to be better. (Chua labels this belief as a type of "insecurity.")

3) Mormon doctrine consistently teaches members good habits of self-control. (This trait is listed as "impulse control" in the original statement.)

Whether or not you agree with Chua and Rubenfeld’s conclusions, it’s definitely interesting to see how others view us. Check out the full article for more of our thoughts and to let us know what you think.

If you watched Antiques Roadshow on Monday, January 6th, you were in for a treat: a rare, first edition copy of the Book of Mormon that was passed down through five generations of Saints to the current day. The book, which bears the signature of each of its five owners, is of particular value because of its rich history and good condition. How much did the appraiser say it could go for? The stunning six-figure sum of $100,000! But, like many of our online readers pointed out, the value of the book is more than money--the text is the real treasure.

Despite being an ever-increasing problem, pornography addiction is still little-understood in the Christian community. Among some of the commonly-held myths included in this article are "my teenager probably hasn’t been exposed to pornography," "when people get married, their pornography addictions will stop," and "viewing pornography is only a problem among men."

Find the truth behind these and 10 other pornography addiction myths in this powerful piece on the misconceptions about this growing problem.