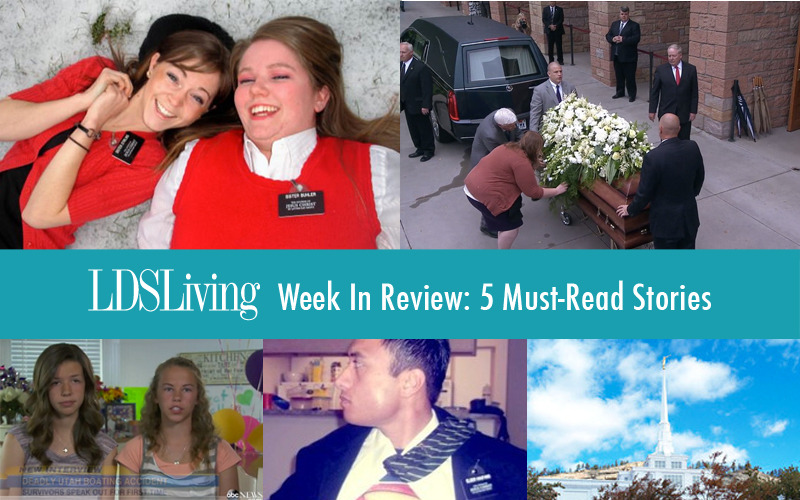 At Elder L. Tom Perry’s funeral in the Tabernacle, Elders Dallin H. Oaks and M. Russell Ballard both delivered heartfelt tributes to their colleague and friend. During his address, Elder Ballard related the following:

“Three days prior to his passing, Elder . . . Oaks and I called on Elder and Sister Perry. We had a tender visit, and as always, Elder Perry spoke of his love of the members of the Church, and his great anxiety and concern for their spiritual well-being.”

On Monday, June 1, 2015, tragedy struck on the tumultuous waters of Bear Lake on the Utah-Idaho border when a quick-moving storm capsized a boat and claimed four lives. Among those on the boat were best friends Tiffany Stoker and Tylinn Tilley, two 14-year-old girls who had to tread water for hours before help came.

Local news outlets (including LDS Living) heavily reported on one touching aspect of Tiffany and Tylinn’s survival—they spent their time struggling to stay above water praying and singing Primary songs with each other. After what must have seemed like an eternity, the girls were rescued just in time—their temperature was less than 70 degrees.

Shortly after the news broke, ABC’s Good Morning America contacted the girls and asked to conduct an interview. The girls agreed, on the condition that the fundraising web pages for the families of the deceased be included in the story.

Pasi Haufano didn’t always want to serve a mission, it wasn’t until he was in his mid-twenties that he even starting to consider the idea. But when he’d made that choice, nothing was going to stop him. His perseverance became a beacon of faith, an example of determination that has quite simply become legendary.

Pasi was raised in a Polynesian (Tongan/Samoan) home in New Zealand and was Baptised in 2006, but he didn’t really understand the significance of what he was doing. “I knew I had to be baptised, but I never understood the doctrine behind it”, he said, “I couldn’t even remember the name of the church, I didn’t know that there was a Book of Mormon.”

The Church of Jesus Christ of Latter-day Saints has withdrawn its proposal to build a new meetinghouse near its temple on the West End of Billings.

In a letter from the church delivered to the city-county Planning Department on Monday, a spokesman said the church was honoring verbal statements it made nearly 20 years ago, promising to build “no additional religious facilities” in the Rim Point Subdivision, according to a report in Last Best News.

-->Read more about how the Church responded here!

Being a celebrity probably isn’t all it’s cracked up to be. Oh, there’s money, sure—but the price of fame ensures that every decision made will be highlighted, every fashion choice scrutinized, and every mistake magnified. Though this prominence may be taxing at times, it does provide those who have it with a unique opportunity to publicly express their opinions and stand for their beliefs.

Many not of our faith have provided the Church with exposure and renown, both on the screen and on the stage. It’s been said that “any publicity is good publicity,” and that may be true—but the best publicity comes straight from the source.

Mormons have the responsibility to act like a disciple of Christ in word and deed, and for a Mormon who’s under the constant watchful eye of the public, that responsibility naturally compounds. Luckily, there are plenty of famous members whose actions reflect positively on the Savior—and some of them are even returned missionaries.