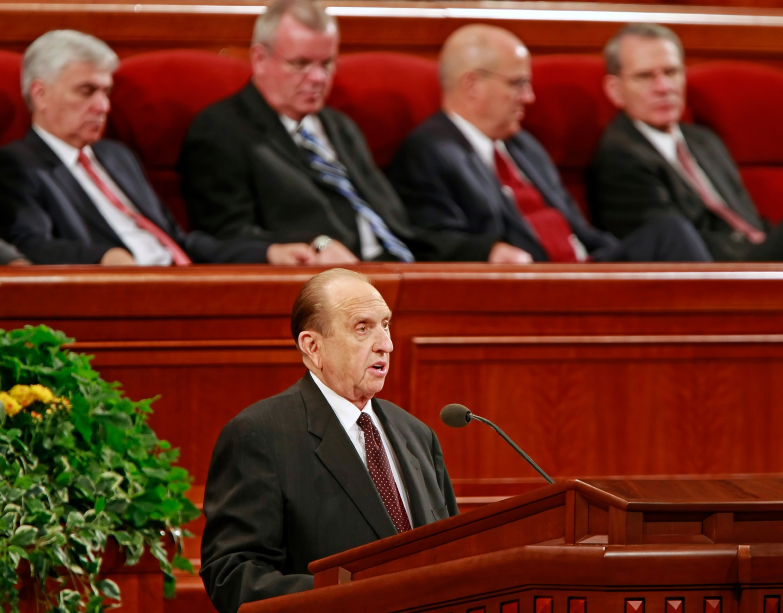 In light of other news about apostles' health, Church spokesman Eric Hawkins said in a statement:

"President Monson is 87. It’s natural that he and others in Church leadership are feeling the effects of advancing age. However, he spoke publicly at General Conference earlier this month and attended all the meetings. He comes to the office every day, attends all First Presidency and committee meetings, leads the discussion, and makes decisions. The workload of the First Presidency is up to date. President Monson has always been private about his health, but appreciates the prayers and sustaining support of Church members, as do all of the First Presidency and the Twelve."

-->Related reading: Why anyone who says the apostles are too old are wrong

Jacob was a sweet boy of 13 when he started at a new school. He, along with several of his siblings, began attending while the family worked to find a home closer to the school. As they had planned, the Johnson family finally found a home near enough to Jacob's school that he could walk there. The house was within walking distance of their ward’s building, too.

But about the time they moved to their closer house, the trouble began.

“They were doing a project on different forms of government,” recalls Jacob's father, Greg. “My son’s group was chosen to do a kingdom. So they drew lots, and he ended up being chosen as king of the kingdom.” One of the boys was unhappy with that decision and started acting aggressively towards Jacob. Thankfully, the project was short-lived, and the Johnson hoped the problem would be, too.

Because “sure enough,” Greg says, “the kid that he had a problem with at school was in our ward.”

-->Read the rest of Jacob's story, and learn how his family seeks to stop bullying at church

Gladys Knight’s faith in God has been a driving force throughout her life, and her thirst for light and knowledge, along with the example of her children, helped prepare her to accept the gospel.

At her daughter’s invitation, Knight began attending Relief Society. “After a while, Kenya told me, ‘Mom, it’s time for you to talk to the missionaries.’” And so she did.

-->See the seven other celebrities who converted

The First Presidency has announced another temple open house and dedication to be held in 2015. The Montreal Quebec Temple, which has been under renovations, will host an open house starting Thursday, November 5, and ending Saturday, November 14. The open house will not run that Sunday, November 8.

In addition, the First Presidency "has approved the groundbreaking for the Cedar City Utah Temple to be held on Saturday, August 8, 2015," a Church news release announced. "Attendance at the site will be by invitation only, and the services will be transmitted via Internet to stake centers within the temple district."

Then in March, when that number had ballooned to 800,000, Yahoo! Beauty reported that Lucky Blue Smith was "taking the world by storm." New York Post called him "a rising star in the industry."

Today, just over a month later, he has more than 1 million followers.

-->Read more about Lucky and watch his appearance on Ellen