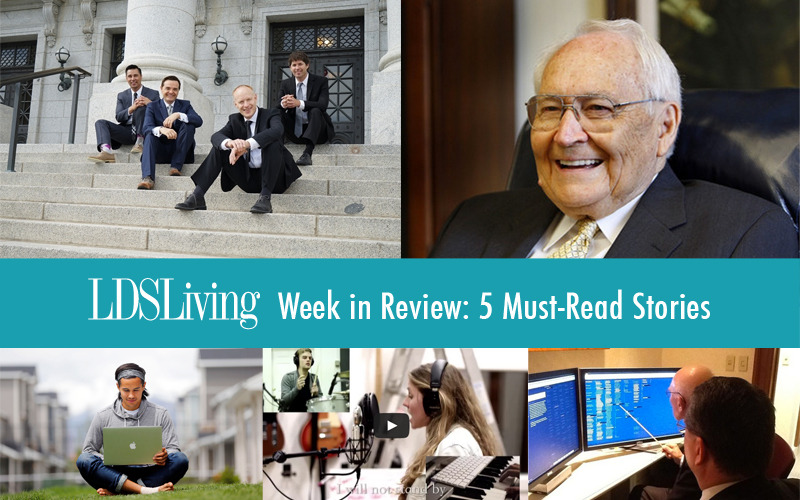 “Elder Perry has asked that we share his thanks for the prayers and kindness extended to him by Church members and friends.  Despite earlier treatments, cancer has spread aggressively to his lungs and beyond.  Elder Perry is at home.  He will no longer attend meetings, though he is still receiving visits from members of the Quorum of the Twelve, the First Presidency, and close family.  He will begin receiving hospice care in the coming days.”

Though Mormons everywhere strive to “be an example of the believers,” a few Mormon YouTubers are an example to millions of people online every day. And they know that the greatest way to spread the gospel around the globe is by simply living their faith—and letting the world see it.

From their music to their website, it’s clear that The Piano Guys acknowledge their talents as gifts from Heavenly Father—and they love to share them. The group consists of pianist Jon Schmidt, cellist Steven Sharp Nelson, producer and videographer Paul Anderson, and music producer Al Van der Beek.

-->Read more about the Piano Guys and other Mormon Youtubers here!

Ever wonder how a prospective missionary gets assigned to his or her mission? Today, Elder Dallin H. Oaks shared a behind-the-scenes look at the process.

In a Facebook post, he shared, "We are assisted in this sacred experience by a member of the Missionary Department staff, who keeps records and manages the computer screens on which we view the essential information on elders and sisters and the needs (including languages) of our more than 400 missions in the world."

After serving an LDS Church mission, Gee enrolled at BYU in 2011, eventually majoring in industrial design.

The Utah County native bought his first smartphone and was downloading apps that he felt might be useful. One app of particular interest to him was designed to scan and read UPC barcodes used to purchase virtually every retail product available.

“I downloaded a specific app, but it was quite ugly and I didn’t like it," said Gee, 26, "so I deleted it and tried to find a different one that would do barcode scanning the way I wanted it to."

-->Find out how he solved that problem!

A group of former and current commercial music students at Brigham Young University have written a song they are trying to get into "The Hunger Games: Mockingjay, Part 2."

The rough draft version of “Live or Survive” was originally written by BYU students Taylor Miranda and Eliza Smith, who were assigned to write a song for the end credits of the Hunger Games for their songwriting class with professor Ron Saltmarsh about a year ago, according to Miranda.

Miranda said in Hunger Games, the characters are sacrificing everything for a chance at a better life, and "Live or Survive" replicates that choice whether to play it safe or just survive.