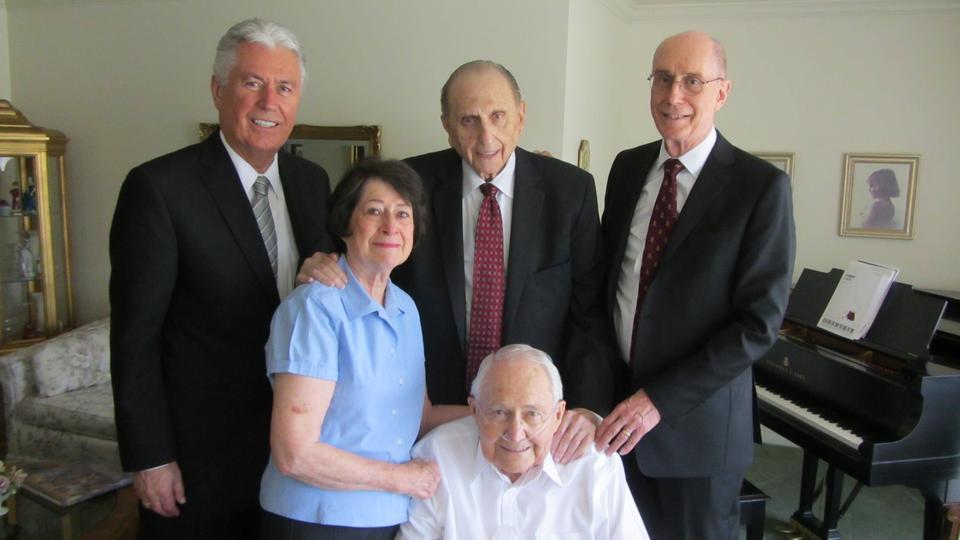 Elder Scott 'Not Fully Able to Participate in Meetings of the Quorum of the Twelve,' Elder Perry Resuming Responsibilities

After being hospitalized for gastrointestinal bleeding April 24, Elder Richard G. Scott was released from the hospital on April 28. Friday, the Church updated his health status with this statement:

"Elder Richard G. Scott, 86, is resting at home recovering from his recent hospitalization for internal bleeding. An ulcer in the stomach was found and the bleeding was controlled without major surgery. Elder Scott, known for his gentle manner and devoted service, has experienced a fading memory incident to age, and is not fully able to participate in meetings of the Quorum of the Twelve at this time. Doctors consider his condition as stable."

20 Powerful Photos of Missionaries Around the World

"Every year my parents would set up an old projector screen and show 35mm slides of their missions. As a young boy, it was awesome.

Almost 20 years on I had this idea to try and find inspirational mission photos from around the whole world. I had no clue how long it would take to compile them, and how many people wanted to get involved. So, THANK YOU to everyone for your photos. If I knew then how long it would take… LOL.

So enjoy some of the most inspirational, ‘get you in the mood’ for mission prep, mission photos I could find. Just imagine yourself in the shoes of these Elders and Sisters, one day this could be you. There are some great stories here, read description below each one and share them with people who need a pickup, some motivation, a reason to keep preparing.

Why the LA Temple's Grass Turned Brown and Other Temple Updates

Bob and Carolyn Millard were married at the Church of Jesus Christ of Latter-day Saints' LA temple more than 50 years ago. Like many other Mormon brides, Carolyn posed for photos alongside the temple's lush, green lawn and gardens.

When she visited the temple last week, Millard was struck by the sight of the hillside expanse that extends down to Santa Monica Boulevard. It was mostly patchy and brown--it turns out with good reason.

-->Read more about why the LA Temple's grass is brown

-->Or see amazing photo updates from temples under construction

Not sure what kind of themed cake to make for your missionary's homecoming or child's baptism? You might be inspired after seeing these amazingly constructed cakes.

-->Check out the rest of the gallery of eye-popping cakes

"This is Lex de Azevedo. We are finally making a motion picture of Saturday's Warrior."

So shares the Saturday's Warrior 2016 - The Motion Picture Facebook page. The original 1974 production became a classic among Latter-day Saints.

Deseret News reports, "Over the years, Saturday’s Warrior has played in more than 300 cities in 37 states, as well as in Canada, England, Australia, New Zealand, France, South Africa, and South America."