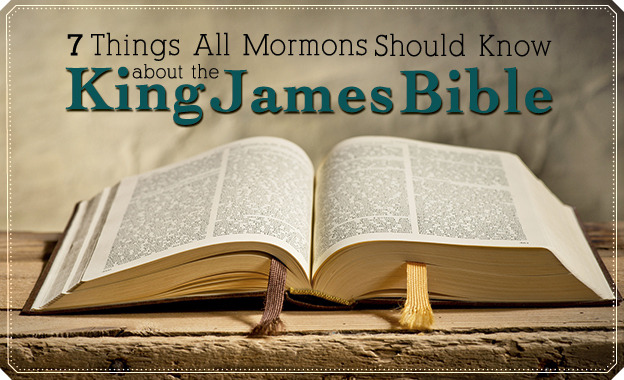 7 Things All Mormons Should Know about the King James Bible

In 1979, the LDS Church published its first edition of the Bible in English, and in 1992, it was officially adopted by the Church as the Bible of preference.

But if you’ve ever looked at the title page of your LDS quad and wondered about King James and his Bible, you’re not alone.

Here are seven things all Latter-day Saints should know about the King James Bible (KJB).

The King James Version of the Bible was written to be read aloud.

-->Learn more about your Bible

The Church announced two exciting events this week. First was the kick-off of a brand-new Christmas campaign under the hashtag #ShareTheGift. A special, shareable video was released as part of the campaign to emphasize the purpose of Christmas and God's gift of His Son.

In addition, members can look forward to a special First Presidency message--in their email inboxes. The apostles are really diving into technology with the start of occasional email newsletter updates.

-->Learn more about the #ShareTheGift Campaign

This week BYUtv's Studio C was pleasantly surprised to have their first viral sketch. With over one million views (the first of the sketches to reach that number!) in five hours and over 10 million in 10 days, this is one you will definitely want to see!

Some of the top LDS performers and YouTube stars are joining forces to create the world's largest Nativity scene and break a world record. Volunteer extras have been signing up all week for a chance to be part of this historic event!

-->Learn more about the event

Finding Gratitude While My Dad Was Dying

It was early on a Sunday morning in January and the fifth-floor cancer wing of the East Texas Medical Center was uncharacteristically quiet.

I had spent the night on the couch in my father’s hospital room, and before rising, I peeked through the curtains just above my makeshift bed and out into a winter wonderland—the trees and grounds glowing with freshly fallen snow. The peaceful scene before me contrasted sharply with the anxiety I felt over my father’s rapidly deteriorating condition.

I settled into a chair beside my father’s bed, and while watching my big teddy bear of a father sleep, I thought about how he had never missed a Sunday of church until the last couple of weeks when he was too sick and weak to attend.