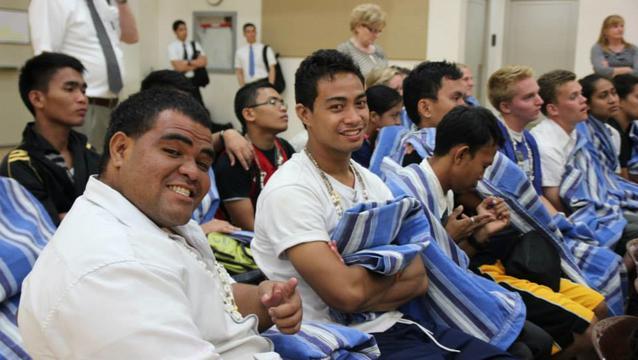 Over the past week the news lines have been busy with stories and updates on the devastating typhoon Haiyan in the Philippines. The monster storm hit last Friday, November 8th, and by Monday all missionaries impacted were declared safe and accounted for. Tacloban and the Tacloban Mission were hardest hit, and now the 204 evacuated missionaries from that area are being temporarily housed near the Manila Temple. These missionaries are waiting to either be reassigned, or if they were near the end of their mission, most likely to return home a little early. Haiyan did not leave enough time for complete preparation by local mission authorities, but Tacloban missionaries were well taken care of, moved to secure areas, and provided with 72-hour kits before the storm. They were generously provided with necessities by other missionaries and the Church after the traumatic storm left them near destitute.

The displaced missionaries are not the only recipients of generous service, however. Seven of the 21 Church missions in the area were affected by the storm, and in response, an army of Filipino volunteers are persevering in their efforts—mostly a continuation of earthquake relief efforts started a month ago—to help the rest of the distraught and suffering Filipinos. Because of the already strong local volunteer support, church members outside the Philippines who have a desire to help are encouraged to pray for those impacted and to consider increasing fast-offering donations or giving to the humanitarian fund, which are both important resources for the church when responding to disasters like Haiyan.

Recently LDS Living talked with Ann Romney, wife of 2012 presidential candidate Mitt Romney. It was fascinating to talk with her about the very public life she and Mitt have shared, especially their experience with the 2012 presidential election.

“I wish everyone would have an opportunity to see this country the way Mitt and I did,” she says. “It’s an extraordinary, beautiful place with extraordinary people. There isn’t one specific event or one moment that stands out—it was just the people that we grew to love, those who were there for us. We were humbled by the experience and so appreciative of those who tried to get us elected.”

It was also fascinating to learn more about family life in the Romney household. Ann was extremely candid as she talked about the challenges of raising five rambunctious boys, how she copes with her multiple sclerosis, how she and Mitt keep their marriage strong, and how they now enjoy life as grandparents to 23 grandchildren. In addition to living the gospel, Ann says one of the keys to keeping her family close-knit is by sharing traditions—especially those that stem from the kitchen.

“Traditions, especially those that involve cooking, can spark conversations about family history and create new memories,” she says. “They are the glue that binds a family together.”

It is this belief that inspired Ann to share her family's traditions and most beloved recipes in her new book, The Romney Family Table. Filled with personal reflections from Ann, this is much more than a cookbook—it is a glimpse into a strong, loving family. (But make no mistake, the recipes are fantastic.) Try recipes from the book here or read more from our interview with Ann Romney here.

3. The Church Announces New Expansions to the Provo MTC that Affect BYU Campus

After President Thomas S. Monson's announcement of the missionary age change in October of last year, the number of missionaries serving blossomed from 58,000 in 2012 to 80,333 as announced last month in general conference. As long term effects of the shift have started coming to light, the Church is moving to permanently make room for training more of these eager young missionaries.

Initial overflow protocol had the Provo MTC utilizing nearby apartment structures to house the additional missionaries and holding devotionals in the BYU Marriott Center, but official plans for permanent changes were shared this week: "The Church. . . [will] expand the Provo Missionary Training Center to the south of the existing MTC campus where the BYU Laundry Building and the Auxiliary Maintenance Building are currently located," said church spokesman Cody Craynor. The MTC will gain access to 12 acres of land as part of this change. Project completion dates have not yet been estimated.

In recent news, the Church has become increasingly transparent about its history, including revealing some interesting little-known facts in the recent release of the new Joseph Smith Papers: Documents, Volume 1. Gerrit Dirkmaat, editor of the papers, shared ten nuggets of knowledge his work on the project exposed including things like how the Book of Mormon was originally published with a preface in which Joseph Smith explained that he had also translated “by the gift and power of God” the book of Lehi but that it had been stolen from him.

After a long battle with liver disease, former BYU running back and NFL TV analyst Todd Christensen died during liver transplant surgery this past Wednesday (November 13, 2013). Friends and family remember him as a sharp and capable man whose understanding of the game came naturally. Former teammate and BYU quarterback Gifford Nielson also praised his leadering in the home as a husband and father. Todd will be dearly missed.

In memorandum of his hayday, we invite you to watch these great Todd Christensen highlights from his football days: