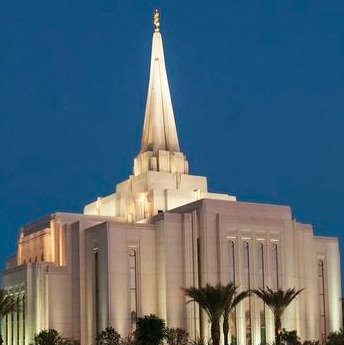 Missionaries Brad Witbeck and Aaron Potter in New York decided to take teaching the Plan of Salvation to a whole new level. These missionaries created a giant chalk mural of it!

The idea originated from a member who mentioned painting the plan on large sheets of paper while seriving a mission in Russia. Elders Witbeck and Potter took it from there.

After checking with the local police, they recruited members of a local Institute to come to the event. One of the students, Lara Mayfield, used her phone to film the footage shown in the video below.

The act certainly spurred on some questions from passers by, which the elders and sisters were prepared to answer. We commend these missionaries for being so creative! Way to take a new approach to street contacting!

2. Mormon Temples in the Spotlight

This week, various LDS temples have graced the headlines of papers across the West. For starters, the Church announced the open house and dedication dates  for the Gilbert Arizona Temple, which is the largest temple built in 17 years. The open house will be Saturday, 18 January 2014, through Saturday, 15 February 2014, excluding Sundays. The temple will then be dedicated on Sunday, 2 March 2014.

Further up north, residents of Meridian, Idaho, had a few ruffled feathers as the new Meridian Idaho Temple site got prepped for construction. Neighbors took issue with how large the temple would be (120 feet high) and how close it would be to their properties. A few complained about the loss of their view (but perhaps they don't know just how gorgeous the temple will be once it's built!). Happily, two days later, the temple got the okay from Ada County to go forward with construction.

And lastly, there was a lovely photo essay from the LDS Newsroom on the beauty and purpose of temples. These beautiful photos encompassed everything from weddings to eternal families to baptisms for the dead.

3. My Name Used to Be Muhammad: One Man's Journey from Muslim to Mormon

This story has by far been the most popular on our site this week. Tito Momen's journey is incredibly inspiring--and all true. For converting from Islam to the LDS faith, he was disowned by his family, expelled from school, and falsely imprisoned for many years. His faithfulness and determination to stick by his standards during all those years in prison are an inspiration to us all. Read an excerpt of his story on our website, or buy his book at deseretbook.com to read the whole thing.

If you're not on Twitter, perhaps you missed out on the fact that there's a new hash tag in town: #MormonHalloweenMovies. Under this new tag, you'll find some pretty silly names of "scary Mormon movies." Some of our favorites include, "I Know what you didn't do last month--home teaching chronicles," "Dawn of the Dead: Early Morning Seminary," and "Elder Scissorhands."

If these movies are too scary-sounding for you, you can always check Netflix for some great LDS-themed flicks.

After the focus on missionary work in Conference, we were excited to start a new 6-week family home evening series based on Preach My Gospel. Each lesson emphasizes those sections of the missionary manual that apply to member missionary work.

If you missed the first lesson this past week, don't worry: you can pin the series directory with the image below, and work through them at your own pace.