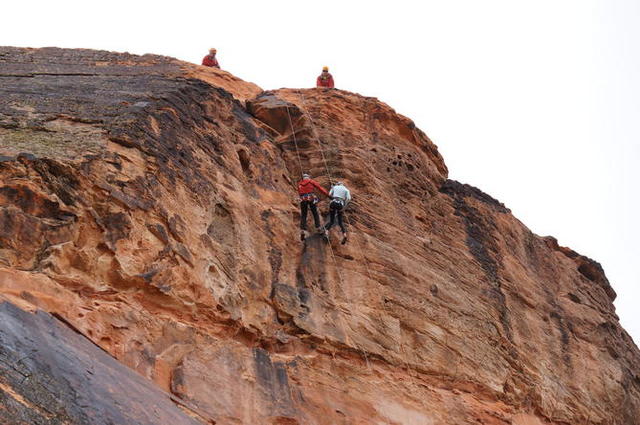 LDS Woman Returns to Conquer Cliff that Paralyzed Her

What a great example of strength and resilience. Four years after becoming paralyzed, Brittany Fisher said, "I definitely have seen in these four years, more with that eternal perspective, the things I have learned, the lessons I’ve had to learn in a very painful, long and slow process. I’m grateful for what I’ve learned, not necessarily grateful for how I’ve learned it, but I don’t know how else I could’ve learned it this intensely or fully without going through what I’ve gone through."

It was dark the first time Brittany Fisher and a friend decided to rappel from St. George’s Cougar Cliffs. It was so dark that she had no idea just how high the cliff’s edge was from the ground beneath. That night in March 2012, while on a spring break trip with friends, Fisher, then a cross-country runner at Utah State University, fell what she later learned was about 100 feet while rappelling in southern Utah. She was left paralyzed from the waist down.

Last month, Fisher and eight to 10 volunteers returned to the same cliff, but this time she could see everything clearly. She could see just how tall the cliff was. She remembered where she sat as her friend hooked everything up the night of the accident. While these memories may seem traumatic and harrowing, Fisher said she felt peace.

“Everyone was really nervous about how they were going to feel that day,” Fisher said. “Like if it was going to bring up anger or frustration, and it really was just a peaceful day for everyone, which really was confirmation that God is in the details of our lives and that he can turn trial into triumph.”

Fisher returned to the cliff to finish what she started four years earlier.